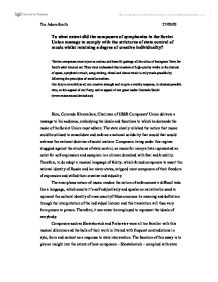 To what extent did the composers of symphonies in the Soviet Unionmanage to comply with the strictures of state control of music whilst retaining a degree of creative individuality?

To what extent did the composers of symphonies in the Soviet Union manage to comply with the strictures of state control of music whilst retaining a degree of creative individuality? "Soviet composers must reject as useless and harmful garbage all the relics of bourgeois 'form for form's sake' musical art. They must understand that creation of high-quality works in the domain of opera, symphonic music, song-writing, choral and dance music is only made possible by following the principles of socialist realism. Our duty is to mobilize all our creative strength and to give a worthy response, in shortest possible time, to this appeal of our Party, and to appeal of our great leader Comrade Stalin! (www.mster.macunlimited.net) Here, Comrade Khrennikov, Chairman of USSR Composers' Union delivers a message to his audience, embodying the ideals and functions to which he demands the music of the Soviet Union must adhere. The state clearly relished the notion that music could be utilised to consolidate and enforce a national solidarity that would that would embrace the national doctrine of social realism. Composers living under this regime struggled against the strictures of state control, as music for many artists represented an outlet for self-expression and escapism in a climate drenched with fear and brutality. Therefore, to do adopt a musical language of falsity, which forced composers to assert the national identity of Russia and her sister states, stripped most composers of their freedom of expression and stifled their creative individuality. The amorphous nature of music renders the notion of enforcement a difficult task. ...read more.

1919), continued to compose in their own style, with the knowledge that these works could not be made public and were strictly for the drawer. Film music was a popular choice for many composers in these difficult times. As well as having the advantage of seeming practical and populist, it received less attention from the Party and moments of dissonance could be sneaked in to accompany the on-screen appearance of a villain. With this description aside, it is thus pertinent to shed light on the extent to which Shostakovich complied with the strictures of state control and examine some of the notions that emanate from his work. The bulk of this discussion will focus on the early symphonies whilst passing comment on a number of other works. The motif behind analysing these symphonies lies in the notable transitions in personal style, which manifest themselves clearly and also because the symphony was perhaps the only genre in which composers could ascertain a level of originality and experimentation through use of ambiguity, irony and satire. As this is a genre void of the spoken word - although attempts were made to incorporate vocal components unsuccessfully - it was thus easier for a composer to invoke ambiguities, as music does not convey a fixed message. On listening to Shostakovich's First Symphony, it is apparent that its style is far from that of his latter works and is conservative in nature. The structure follows a traditional four movement framework with sonata principles governing the first and last movements and ternary principles underpinning the second and third. ...read more.

The themes are tonally based which are accompanied by modified levels of dissonance and a more restrained orchestration. The modernist Mahlerian influence, which pervaded the Fourth Symphony is clearly apparent in the second movement in the forms of a Scherzo and Trio. Thus, this clearly does not represent the ideals of socialist realism and acknowledges western principles. The absence of the brass section in the third movement is a tool which Shostakovich employs to add resonance to their entry in the last movement - a device which Mahler also used. Tonality underpins the harmonic process with extreme use dissonance at times perhaps referring grotesque nature of his Second Symphony. The concluding passage of this symphony appears triumphant in nature, and thus portrays what was expected of a Soviet symphony, but the painfully slow pace of the conclusion (which wasn't always understood by early interpreters) is still a defiant gesture on the part of the composer, clouding the triumph with a bitter irony. It is this use of sarcasm that Shostakovich utilised to maintain his creative individuality and at the same time appearing to adhere to the ideals of socialist realism. Therefore in conclusion, the early work of Shostakovich constructs a narrative in which the strictures of the state can be discerned but this didn't stop many aspects of his work to achieving distinct individuality. The referring back to the conservatism of his first symphony and at the same time embracing the rebellion of the intermediate Symphonies enabled Shostakovich to strike a balance between conforming to state policy and maintaining his individuality. Thus, the ambiguous nature of music enabled this composer the means to challenge state musical policy without the regime taking noticing. ...read more.