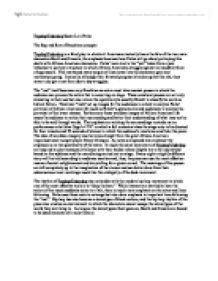 Topdog/Underdog Susan Lori-Parks The Rep and Rev of Brechtian concepts Topdog/Underdog is a fated play in which all Americans instantly know the fate of the two main characters Booth and Lincoln; the emphasis becomes how Parks will go about portraying this death with African American characters. Parks' main tool is the "rest" taken from a jazz influence to portray a structure in which African Americans struggle against an inaudible force of oppression. This rest found every couple of lines never lets the characters gain any momentum going. Ironically, although their forward progress is broken up by this rest, they never truly get a rest from day to day struggles. ...read more.

Furthermore these wordless images of African American life cause the audience to notice their surrounding and better their understanding of what may not be able to be said through words. The emphasis on noticing the surroundings reminds me on performance artist John Cage's 4'33" in which a full orchestra takes the stage only to be directed for four minutes and 33 seconds of silence in which the audience's reactions constitute the piece. The idea of wordless imagery also borrows straight from the great African American improvisational trumpet player Dizzy Gillespie. As notes are spewed into existence the emphasis is on the spontaneity of the event. ...read more.

The rhythm of Topdog/Underdog also coincides with the modern hip-hop movement in which one of the most effective tools is to "drop the beat." While listeners are startled to hear the action of the music suddenly come to a halt, there is much more emphasis on the notes and lines following. Parks uses these rests to estrange but also draw emphasis to important lines following the "rest." Hip-hop has also become a stereotype of black culture, and the hip-hop rhythm of the piece also creates an environment in which the characters cannot escape the stereotypes of the world they are living in. As long as the stereotypical beat goes on, Booth and Lincoln are bound to be dead elements of a racist history. ...read more.