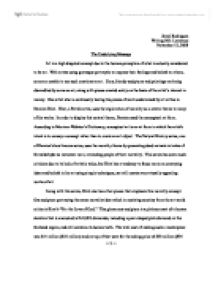 Art is a high disputed concept due to the human perception of what is actually considered to be art.  With artists using grotesque portrayals to express their feelings and beliefs to others, some are unable to see such creations as art.  Gory, bloody sculptures and paintings are being discredited by some as art, along with pieces created solely on the basis of the artist’s interest in money.  One artist who is continually having his pieces of work undermined by art critics is Damien Hirst.  Hirst, a British artist, uses the exploration of morality as a central theme to many of his works.  In order to display this central theme, Damien used the conceptual art form.  According to Merriam-Webster’s Dictionary, conceptual art is an art form in which the artist's intent is to convey a concept rather than to create an art object. The Natural History series, one of Damien’s best known series, uses the morality theme by presenting dead animals in tanks of formaldehyde as memento mori, reminding people of their mortality.  This series has seen much criticism due to its lack of artistic value, but Hirst has a tendency to focus more on conveying ideas and beliefs in his art using simple techniques, yet still creates very visually appealing works of art.

Along with this series, Hirst also has other pieces that emphasis this morality concept.  One sculpture portraying the same mortality idea which is receiving scrutiny from the art world critics is Hirst’s “For the Love of God.”  This glamorous sculpture is a platinum cast of a human skeleton that is encrusted with 8,601 diamonds, including a pear-shaped pink diamond on the forehead region, and still contains its human teeth.  The total cost of making such a masterpiece was £14 million ($21 million) and on top of that went for the asking price of £50 million ($76 million).  Due to such a high asking price, there are claims that Hirst is just making meaningless creations to make money for himself, yet this is not the case.  Art is anything which catches your attention and allows someone to make meaning of it and Damien Hirst’s piece, “For the Love of God,” is a piece of art due to its ability to endlessly attract attention and due to the underlying messages of mortality and life after death which the skull itself represents.

In the constructing a sculpture or painting, there is a necessity for the piece of work to be able to attract attention, even if not always necessarily in a pleasing manner.  Whether the work of art is a luminous sunset on a calm body of water or it is a man who has no skin and has all his muscles exposed, the art must draw in the viewer.  Without attracting someone, the reason behind the bringing to form of such art goes to waste.  “For the Love of God” is a work of art which can attract many people.  Due to Hirst’s intelligence, it seems that he uses so many diamonds, not for the fact of making money, but because in society diamonds are a rarity.  Having so many diamonds together within such a confined area, people are bound to be drawn to the skull.  In the society we live in now, being very materialistic, we are very intrigued by expensive, rare commodities and Hirst takes this in to consideration and utilizes this human obsession.  By using these diamonds as a way of attracting, the attention of the viewer is now focused on the piece and they can begin to question what this sparkling skull represents.

In order for a creation to be labeled art, a person must be able to gain their own understanding of what the artist’s beliefs/feelings may be of a particular issue or extract a deeper meaning than what is presented at hand. Interpreting art and extracting meaning from it is all based on the personal feelings and beliefs of an individual.  While one person may see a painting or sculpture as meaning one belief while another person may see that same piece as meaning the total opposite.  Along with there being different interpretations, there also may be multiple interpretations.  “For the Love of God” meets yet another requirement as to why it should be referred to as art by having the ability to allow viewers to obtain different interpretations.  One possible interpretation could be that the skull is representing how humans get so wrapped up in the material things in life that they lose their true identity.  The diamonds represent all the material that people tend to obsess over, such as shoes, pocket books, body accessories, etc., and how an individual is covered by these obsessions, focusing all their attention towards obtaining such objects.  The human teeth are there as a representation that there is still hope for the person to overcome their materialistic obsession and live a true life based on morals and ethics rather than fads and trends.

Along with the interpretation of losing human identity, one may also interpret the sculpture of the skull to be a representation of material goods staying with your body on earth while your spirit goes to the afterlife.  If one is more of a religious thinker, this is definitely a possible consideration.  Due to the fact that during their lives people worry more about worldly goods than about doing good deeds, they lose the sense of being a good person in order to have the ability to cross over into heaven.  Such as explained in the play Everyman, the only possession that you are able to take with you into the afterlife are the good deeds you’ve accomplished throughout your life.  All of your worldly possessions that you obtain throughout your life, even such a thing as knowledge, are left behind on earth, just like your body itself.  From this interpretation, one can conclude that Hirst is trying to help people in understanding to pass peacefully through the afterlife; one must realize what is truly important, and not fiend for the worldly possessions.

As seen as common in the world of art, not all people agree with Hirst’s sculpture being a piece of art.  One art critic who is very biased against many of the works done by Hirst is Robert Hughes.  In his article, “Day of the Dead,” Hughes tears apart many of Hirst’s most prominent works of art.  He claims that Hirst’s works are simple-minded and get much praise that it does not deserve.  Within the article Hughes makes a claim pertaining to Hirst’s creation, “The Physical Impossibility of Death in the Mind of Someone Living”.  He claims that this work of art should not be claimed art due to the fact that he did not catch the shark himself.  Hughes also makes the claim that anyone can make something like Hirst did and call it art.  The difference though between Hirst and that “anyone” is that Hirst has the train of thought to call it art.  Hughes can claim all he wants about how anyone can create a similar work of art like Hirst, but the fact that nobody before him has made such pieces, makes such creations a Hirst original.  On the concept of the diamond encrusted skull, Hughes tries to down play the brilliance of it by comparing it to sugar skulls sold on Mexican street during the Day of the Dead.  Throughout his whole article, Hughes has a bitter feeling towards Hirst’s art, which is noticeable with all his negative claims, and with this bitterness he loses much persuasiveness.  From this loss of persuasiveness, it emits a sense that Hughes will say anything just to undermine the success of Hirst thus emphasizing that what Hirst creates, especially “For the Love of God,” is art.

The labeling of a piece of work as art is a very controversial concept.  By just claiming something as art, there can be much disagreement.  Yet due to the ability for one to have their own personal definition of what art is, there is a broad range of claims as to why something is art.  In the case of Hirst’s work, “For the Love of God”, I see it as art due to its flawless presentation which easily attracts people by it mass amounts of diamonds and also due to the reason that thoughts can be evoked and one can create a meaning as to why the artist created it.  For those reasons, “For the Love of God” should be seen as art and appreciated for the great creation that it is. 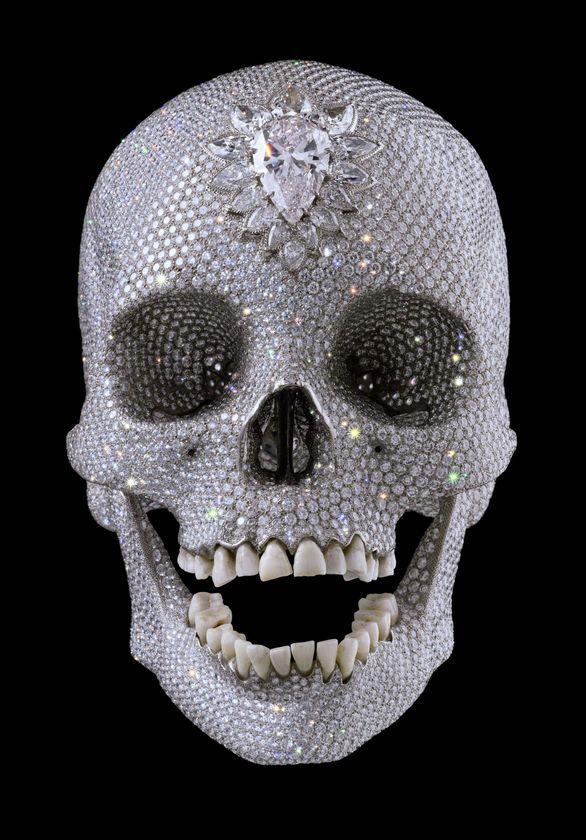