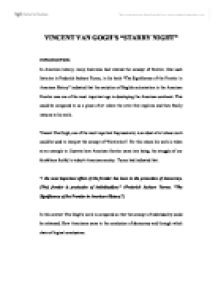 VINCENT VAN GOGH'S "STARRY NIGHT" INTRODUCTION: In American history, many historians had revered the concept of frontier. One such historian is Frederick Jackson Turner, in his book "The Significance of the Frontier in American History" indicated that the evolution of English colonization in the American Frontier was one of the most important age in developing the American continent. This could be compared to as a piece of art where the artist first explores and then finally matures to his work. Vincent Van Gogh, one of the most important Impressionist, is an ideal artist whose work could be used to interpret the concept of "frontierism". For this reason his work is taken as an example to illustrate how American frontier came into being, the struggle of our forefathers fruitful to today's American society. Turner had indicated that: ". the most important effect of the frontier has been in the promotion of democracy. [The] frontier is productive of individualism." ...read more.

The painting used a combination of black, blue and yellow colors to give it a bluish golden effect thereby capturing the essence of a starry night. [Boime, Albert. "Starry Night: A History of Matter, A Matter of History] VAN GOGH'S STYLE: Starry Night is a complex piece of work to understand due the historical background of the painting. One reason is that most of Van Gogh's work has had detailed review by himself written in various letters to his brother Theo. But this particular piece did not have such opinions from the artist himself. Instead it was mentioned fleetingly in two of his letters. Critics and commentators derive their conclusions through his other works like "Road with Cypress and Star" and "Field of ripe wheat" that had similar backgrounds of stars. So like America's history where the abundance of resources was hidden. It was not known that America holds such enormous resources till later when colonist began to move westward. ...read more.

As later one read through his works, one finds out that the stars showed in painting is in congruent to the constellation of the stars in that era. [Heinich, Nathalie. The Glory of Van Gogh: An Anthropology of Admiration] The use of golden coloring could be compared as the gold rush that was attracting most Europeans to the continent in the first place. The golden light was affecting the colonies in an incredible way that was not imaginable. People poured in the continent from all parts of the world. America was engulfed by this gold mania. Indeed the painting has an engulfing feel of the stars golden light. [Turner] CONCLUSION: Van Gogh's work is so similar to the frontier that posed to the colonist of Americas. Foremost, it was a unique art form that was independent of any traditional artistic rules. The painting gives one the feeling of freedom of expression, which was Van Gogh's motive. So like the American frontier, Starry Night was the result of a mental struggle, which would eventually become clear to the onlooker that it has significant importance in history. ...read more.