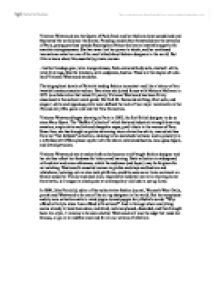 Vivienne Westwood was the Queen of Punk Rock and her fashions have scandalized and fascinated the world since the Sixties.

Vivienne Westwood was the Queen of Punk Rock and her fashions have scandalized and fascinated the world since the Sixties. Parading models bare-breasted down the catwalks of Paris, posing pantiless outside Buckingham Palace-she has an insatiable appetite for anarchic outrageousness. She has never lost her power to shock, and her continued innovations make her one of the most talked about fashion designers in the world. But little is know about this essentially private woman . Leather bondage gear, latex lounge dresses, flesh-coloured body suits, slashed t-shirts, mink G-strings, fake fur knickers, satin codpieces, bustles. ...read more.

Vivienne Westwood began showing in Paris in 1982, the first British designer to do so since Mary Quant. The "Buffalo Collection" which featured industrial-strength bras atop sweaters, ample skirts and tattered sheepskin capes, paid tribute to the women of Peru. Since then, she has brought us pelvis-skimming micro-chrinoline skirts, razored clothes from her "Cut & Slash" collection, clashing tartan and check knitwear and is presently in a lofty Scarlett O'Hara phase replete with the above-mentioned bustles, hour-glass figure, and netted petticoats. Vivienne Westwood was a teacher before she became a self-taught fashion designer and her clothes reflect her fondness for history and learning. ...read more.

The cut and slash look, inspired by medieval warriors returning home from battle, is a tongue-in-cheek poke at contemporary rich kids in cut-up Levis. In 1989, John Fairchild, editor of the authoritative fashion journal, Women's Wear Daily, proclaimed Westwood to be one of the six top designers in the world. But her sumptuous and sly new collection calls to mind yippie-turned-yuppie Jerry Rubin's words: "Why offend with style when I can offend with actions?" And in this age where everything seems already to have been done, mutilated, metamorphosed, discarded, and then brought back into style, it remains to be seen whether Westwood will lose the edge that made her famous, or go on to redefine once and for all our notions of rebellion. ...read more.