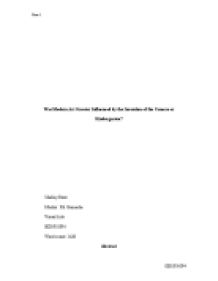 Was Modern Art Greater Influenced by the Invention of the Camera or Kindergarten?

﻿Ross Was Modern Art Greater Influenced by the Invention of the Camera or Kindergarten? Shelley Ross Mentor: Mr. Gamache Visual Arts 000193-094 Word count: 2420 Abstract Does the amount of exposure to conforming pressures of society affect one self?s artistic expression? Environment heavily influences style of art. Without realizing, we start to imitate certain qualities of people and things around us. Art Brut represents the work of people who are the least conformed to and influenced by society. Is there a correlation between the amount one is conformed to society and style of artwork produced? While the movements between the times of cave art and modern art varied greatly in use of colors, techniques, and mediums, they are heavily influenced by the environment the people are in, and by other pre-existing art. Inventions of cameras and optics tools greatly changed the ways in which artists painted and created. In more recent years, the original ideas of very structured kindergarten have led to children growing up to be artists that created pieces in the style of cubism. Modern and abstract art movements grew rapidly across the world during the late nineteenth, early twentieth centuries. Ideas spread and influence others, so what if someone is uninfluenced by current styles? Today, these types of works have been categorized as outsider art. What greater in influenced modern art, the invention of the camera or kindergarten? Word count: 205 Table of Contents: Page 2. Abstract Page 4. Introduction Page 5. Investigation Page 13. Conclusion Page 15. Works Cited Introduction My immediate idea for my extended essay was a topic involving ancient art. ...read more.

One possibility of the start of the modern art era was the new methods being implicated through kindergarten. In 1876, Ruth Buritt was a young teacher in charge of teaching the kindergarten class, which was very new to America at the time. She would engage the children in active play, singing and dancing. They would also have to practice focusing and concentrating while sitting at long worktables. They would be asked to create geometric designs using small pieces of wood, colored paper, thread, wire and other materials. (Brosterman 10) It is hard to say that an artist?s style was definitely due to their childhood upbringing in kindergarten, practicing meticulous work, although when looking at numerous examples, it is easy to infer that there is a great possibility. Anna Wright was a woman who was very impressed by Ruth Buritt?s work. She had decided that she wanted her son to be an architect, so she purchased a set of educational toys for him that were called Occupational Material for the kindergarten. She also enrolled in a weekly class in which she would learn how to teach the use of the toys to her son. Her son, Frank Lloyd Wright grew up to be a famous architect, and credited the toys, known as Froebel gifts, for being the foundation for his career. (Brosterman 11) Through Friedrich Froebel?s gifts, there were ideas that were to be administered to the children. The three fundamental categories were forms of nature (life), forms of knowledge (science), and forms of beauty (art). ...read more.

(Peiry 14) While living in Florence as a child, Kandinsky utilized kindergarten’s colors, forms and shapes, and use of abstraction. (Brosterman 13) Born in 1866, Kandinsky was still young when kindergarten became popular but did not experience it himself. He had gone to grammar school and only observed kindergarten from the outside. This allowed him to grasp the art styles of child without being so conformed to the geometric patterns and lines that they had been learning. Der Blaue Reiter almanac also included tribal pieces, naïve paintings, and folk art. Kandinsky stated “the capacity to see the world through the eyes of children permits the youthful drawer to discover the inner sound of an object... There is an unconscious power in children that expresses itself here and places the work of children on the same level as the (and often much higher than!) work of adults.” (Kandinsky 251-52) It seems as though young children’s minds are formed and shaped to fit society at a young age. If so many artists try to recreate and be inspired from children’s naïve artwork, is it a negative that children are taught organization and conformed to society through school? If every person in the world created work categorized as Art Brut, meaning they haven’t been greatly impacted by society, would the world be back to days of cavemen and early civilization? Although, if children never learned rules and ideals of society, organization and even civilized communities could be lost. While organization and conforming to society may help children to succeed in society later in life, they lose their young ignorant self-expression. There is only so far the mind can wander and imagine past boundaries instilled so early on. ...read more.