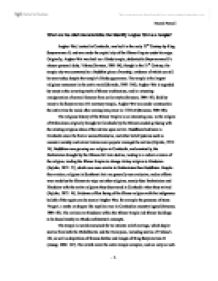 What are the chief characteristics that identify Angkor Wat as a temple?

What are the chief characteristics that identify Angkor Wat as a temple? Angkor Wat, located in Cambodia, was built in the early 12th Century by King Suryavarman II, and was made the capital city of the Khmer Empire under his reign. Originally, Angkor Wat was built as a Hindu temple, dedicated to Suryavarman II's chosen personal deity, Vishnu (Rawson, 1995: 96), though in the 15th Century, the temple city was converted to a Buddhist place of worship, evidence of which can still be seen today, despite the temple's Hindu appearance. The temple is the largest religious monument in the entire world (Roveda, 1997: 100). Angkor Wat is regarded by many as the crowning work of Khmer architecture, and is a stunning amalgamation of several features from earlier styles (Rawson, 1995: 81). Said by many to be Suryavarman II's mortuary temple, Angkor Wat was under construction the entire time he ruled, after coming into power in 1113AD (Rawson, 1995: 80). The religious history of the Khmer Empire is an interesting one, as the religion of Brahminism originally brought to Cambodia by the Khmers ended up fusing with the existing religious ideas of the natives upon arrival. Buddhism had been in Cambodia since the first or second Centuries, and other belief systems such as ancestor worship and animal totems were popular amongst the natives (Fujioka, 1972: 16). Buddhism was growing as a religion in Cambodia, and eventually, the Brahminism brought by the Khmers fell into decline, leading to a ...read more.

The journey around the temple examining its endless bas-reliefs enlightens visitors to such stories as the churning of the ocean of milk, the battle of Kurukshetra, the battle between the Devas and the Asuras, amongst several images of the heavens and hells, and numerous other battle scenes (Roveda, 2007: 23). The stories depicted not only educate on Hindu history, but also link in with the King's ideas of his kingdom, with the churning of the ocean of milk representing time progressing through cosmic cycles, and it is apparently suggested that King Suryavarman ended a particularly bad cycle, the Kali Yuga and starting a new cycle, like the rebirth shown in the image (Jessup, 2004:150). The relief carvings, as mentioned above, are merely an inch thick, and were clearly produced by the finest craftsmen available. They are said by many to be like paintings (Rawson, 1995: 93), in their softness and attention to detail, similar to the classical styles found in Europe. The sheer amount of decoration, and the depiction of so many religious scenes within the temple have led many to believe that King Suryavarman II was attempting to almost reach heaven before his death (Rawson, 1995: 96), as these features create a feeling of a 'heaven on Earth'. The architectural layout of the site of Angkor Wat is one of the crucial factors that identify it as a temple, with the entire temple being a representation of the Hindu idea of the cosmos and creation. ...read more.

The alignment of the actual temple building is also under heavy examination by several scholars, including Eleanor Mannikka, who believes the temple was meticulously mathematically arranged (Jessup, 2004: 149). According to Mannikka, certain numbers arise many times within the calculations used to build Angkor Wat, and link the temple to astrological events, further reinforcing the relation between it and the cosmos as a whole. Once King Suryavarman II's reign had ended, the capital moved away from Angkor Wat, and it became more and more disused as a Hindu temple, and eventually, after the fall of the Khmer Empire in the 15th Century, the temple became Buddhist, being cared for by Buddhist monks (Rooney, 1994: 84). Reminders of this still survive at Angkor Wat today, with the 'Gallery of 1,000 Buddhas' in the place of what would have originally been a library, and yet very few images of Buddha remain here, where once it would have been filled with them (Rooney, 1994: 92). In conclusion, there are several characteristics that identify Angkor Wat as a temple, most prominently its cosmic arrangement, representing a vision of 'heaven on Earth' to the Hindus, Mount Meru. The carvings covering the entire temple depicting religious scenes also show visitors that this is, indeed, a temple. As the largest religious site in the world, Angkor Wat is definitely a very overwhelming and heavenly temple, and this is obvious within its many carefully selected design features. ...read more.