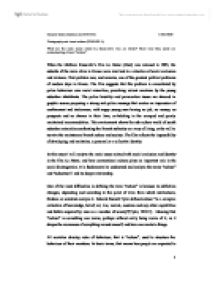 What are the main issues raised by Kassovitz(TM)s film La Haine? Show how they assist our understanding of term culture.

Gerardo Sotelo Martinez (w11341765) 14/01/2008 Photography and visual culture (2PHO433.1): What are the main issues raised by Kassovitz's film La Haine? Show how they assist our understanding of term "culture". When the Mathiew Kassovitz's film La Haine (Hate) was released in 1995, the suburbs of the main cities in France were involved in a situation of social exclusion and violence. That problem was, and remains, one of the greatest political problems of modern days in France. The film suggests that this problem is exacerbated by police behaviour over racial minorities, provoking violent reactions by the young suburban inhabitants. The police brutality and provocation issues are showed in graphic scenes proposing a strong anti-police message that creates an impression of confinement and intolerance, with angry young men having no job, no money, no prospects and no chance in their lives, co-habiting in the cramped and poorly maintained accommodation. This environment shows the sub-culture world of youth suburban minorities confronting the French authority as a way of living, or the will to survive the mainstream French culture and society. The film reflects the impossibility of developing, and maintains, a personal or a collective identity. ...read more.

This enforces and joins the community to create alternative subcultures in defence of their integrity and identity. As Michel de Certeau maintains, "cultures can be an invisible fibre of little tactics by which people maintain some sense of possibility in lives lived in spaces always under someone's control." (McKenzie Wark 1997, un-paginated) One of the forms of reaction against the ways of control is the riot. Rioters feel alienated from the French police, judges, prosecutors, defence lawyers and social workers, in part because minorities are still underrepresented in all these fields. Many of them have friends or family who experienced police abuse: use of excessive force, racist insults, recurrent identity checks, unwarranted arrests and gratuitous harassment in police custody. In fact, the film starts with the images of the riots, in response to the abuse of a young North African descendent during his custody in a police station, causing coma and his posterior dead. The main issue that gave birth to the film is the racist violence, but it quickly disappears to give way for a consensual point of view of and from the three friends united in their social exclusion. ...read more.