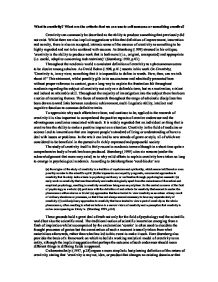 What is creativity? What are the criteria that we can use to call someone or something creative?

What is creativity? What are the criteria that we can use to call someone or something creative? Creativity can commonly be described as the ability to produce something that previously did not exist. Whilst there are also implicit suggestions within that definition of improvement, innovation and novelty, there is also an accepted, intrinsic sense of the essence of creativity as something to be highly regarded and not to be confused with success. As Sturnberg (1999) stressed in his critique; 'creativity is the ability to produce work that is both novel (i.e., original, unexpected) and appropriate (i.e. useful, adaptive concerning task restraints)' (Sturnberg 1999, p.03). Throughout the academic world a consistent definition of creativity as a phenomenon seems to be elusive among scholars. As David Bohm (1998, p.01) asserts in his work On Creativity; 'Creativity is, in my view, something that it is impossible to define in words. How, then, can we talk about it?' This statement, whilst possibly glib in its succinctness and admittedly presented here without proper reference to context, goes a long way to explain the frustration felt throughout academia regarding the subject of creativity not only as a definable term, but as a motivation, a talent and indeed an attainable skill. ...read more.

Here Sturnberg also provides the basis of a framework on which to build a working analytical model of creativity as an entity, although the implicit suggestion that perhaps the outcome of such endeavour should mean different things in differing fields is apparent. Csikszentmihalyi (1997, p.28) argues a more simplistic but pleasing definition of the nature of creativity, stating that 'creativity is any act, idea, or product that changes an existing domain or that transforms an existing domain into a new one'. He asserts that once a basic level of survival is assured within a human (shelter, sustenance, etc.) there is a quantity of surplus attention which creative people will invariably use in a different way to others. The creative individual uses this attention to become master of their particular domain or domains, or manufacture entirely new ones, sometimes to the detriment of their social standing (as they can at times be considered conceited or removed from social normality because of this behaviour). Csikszentmihalyi also affirms that just scrutinizing the subject is not enough but that the context of the creativity (the associated field or domain) should be considered too. This is reflected in his qualitative study (1997, p.12) ...read more.

It does in most cases however, ultimately lead to the demise of its host. From the virus' point of view the process of this innovation is to be applauded as it espouses everything great that is associated with a creative spirit and aside from their fatalistic nature this could be a reason why they are studied with such fascination and awe. When this same creative spirit is seen in humans or animals for positive ends it is celebrated for its efforts to improve and enhance the conditions within its associated field or domain. Whilst a conclusive definition of creativity is perhaps impossible, in its essence creativity should be regarded as the ability to improve a situation or domain, for positive or negative intention, often in the face of obstruction, in an inventive and original manner. Reference List Bohm, D. (1998), On Creativity, London: Routledge. Csikszentmihalyi, M. (1997) Creativity: Flow and the Psychology of Discovery and Invention, New York: Harper Perennial. Gardner, H. (1993) Creating Minds: An Anatomy of Creativity Seen Through the Lives of Freud, Einstein, Picasso, Stravinsky, Eliot, Graham, and Gandhi, New York: Basic Books. Gauntlett, David (2007) 'Chapter 2: The self and creativity', in Creative Explorations: New approaches to identities and audiences, London: Routledge. Sternberg, Robert J., ed. (1999) Handbook of Creativity, Cambridge: Cambridge University Press. ...read more.