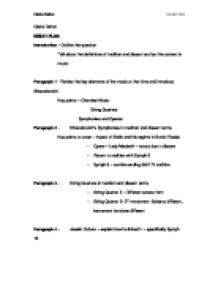 What opportunities does the music of Shostakovich offer for a discussion on tradition and dissent?

by working on some stage music, the first particular prominent writing of Shostakovich was the Opera Lady Macbeth of the Mtsenk District. This was perhaps the first evidence that Shostakovich was using his music to dissent rather than following tradition. It created outcry as it was seen as not following the expected rousing music tradition. "From the very first moment of the opera, the listener is flabbergasted by the deliberately dissonant, muddled stream of sounds"( Quoted in Shostakovich, 1979 in Richards, Fiona - Tradition and Dissent in Music: Dmitri Shostakovich, P204) Due to the Stalin regime and the society that Shostakovich struggled in, he seemed to return to the more traditional structured symphonies with his Symphony No 5. Although this would seem to be quite simply being pressured to return to tradition, however some critics thought that Shostakovich was engaging in the time honoured Russian tradition of saying one thing and meaning another. Through the 1940s Shostakovich continued to compose a number of Symphonies reacting to events of his time, eg: World War 2, the death of his wife. A number of his symphonies were again saw as dissenting from the regime and musical traditions of the time - 8th, 9th and 10th Symphonies particularly seemed to dissent from Stalin's ideals and musical tradition. ...read more.

In Shostakovich's 13th Symphony he used A Jewish poem as the Libretto at a time when ant-Semitism was unofficial state policy. In conclusion, Shostakovich music has created and continues to create a lot of discussion about both tradition and dissent. His music shows many ways in which tradition was used to develop music. Shostakovich seemed very careful about when to follow tradition both in musical form and genre and when to dissent from it to express his views about his and his society's situation. Sometimes Shostakovich had to use tradition to placate Stalin's as dissent could endanger his life. Debate continues as to whether Shostakovich was actually ever following tradition due to the pressures of Stalin's Regime and this is evident in a number of books published since his death. Claims in "The Testimony" say " All of his music was composed with a dissident agenda. What appears to be Soviet Kitsch is actually sarcasm. It allows both the censors and dissidents to find exactly what they want within" (Volkov,Solomon,Testimony) Others saw Shostakovich as a real traditionalist " Although Shostakovich saw himself as a realist, his style was an extension of late 19th century romantic tradition;Mussagsky, Tchaikovsky and Mahler were his free most influence" Edwards, Robert. www.FindaGrave.co.uk) Shostakovich not only used and developed tradition but also dissented where he felt necessary, he himself has become tradition. ...read more.