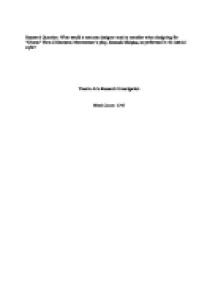 What would a costume designer need to consider when designing for Ohatsu from Chikamatsu Monezamons play, Sonezaki Shinjuu, as performed in the kabuki style?

Fig. 4. Diagram of the front and back of a kimono (Kimono Diagram). The katsura is also a very specific ornamentation. Each wig consists of individual strands of hair attached to a copper base which has to be redressed before each performance less it loses its form (Cavaye 81). It may be further adorned with flowers and ribbons and underneath should be placed a habutae - a type of cap used to contain an actor's own hair (Spencer). As for the obi, it functions only as a decorative belt for the kimono and itself must be held together with stiff interface material and fasteners (Marshall 104). During the Edo era, a female obi, such as what Ohatsu would wear, was standardized at the dimensions of 360 cm by 26.8 cm (Wiltshire 89) and became well-known for its broad width. There is also a specific knot idiosyncratic of onnagata characters called the darari-musubi (Fig. 5; Fig. 6) which is characterized by its length and two tails (Yamanaka 38-39). Fig. 5. Drawing of the traditional darari-musubi knot for tying a Japanese obi (Yamanaka 38). Fig. 6. Picture of two women in kimonos with the dararai-musubi knot shown from the back ("Dararai obi"). As previously stated, onnagata roles were played by males; although there was a push for females on the stage once Japan was occupied by the United States in the 19th century this never gained prominence. This gender issue makes the kimono even more important to a costumer if the actor for Ohatsu is casted per tradition. ...read more.

The most telling costuming reference however occurs when Ohatsu leaves the brothel to commit suicide with Tokubei. At this point the narrator says "Ohatsu is dressed for death, a black cloak dark as the ways of love thrown over kimono of spotless white" (51) which provides a clear indication to the color and outer garments necessary in the scene. It should be further mentioned that in the third scene Ohatsu "removes her tear-stained outer robe" (55). The description "tear-stained" could prompt a designer to show a change in the physical state of the "black cloak" from the previous scene. Meanwhile, the fact that Ohatsu is removing an article of clothing during the scene requires the costumer to prepare for the before mentioned, kikinuku technique. During the dress rehearsals called the so-keiko (Grestle 23), the costumer should pay close attention to ensure that these script requirements have been met and that the costumes do not hamper the necessary actions, something best ensured by consulting the director about blocking before costume construction. Kabuki theatre is an intensely visual and emotionally rich theatre form, known for elaborate and beautiful costumes. To then properly costume for a kabuki play, particularly for Chikamatsu's character Ohatsu, a designer must be aware of the characteristics of the shinjuu genre, an onnagata's traditional clothing, the restrictions placed on kabuki costumes with their impact on color and pattern, and requirements of the script. While Sonazaki Shinjuu, is relatively short, a large range of emotions are covered from despair to happiness in death and if a designer takes the above factors into consideration, the garments themselves might even embody this depth. ...read more.