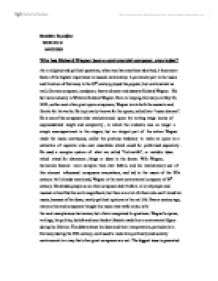 Why has Richard Wagner been a controversial composer even today?

Stanislav Boyadjiev MUS 101 G 04/02/2009 Why has Richard Wagner been a controversial composer, even today? As in religious and political questions, when race has once been admitted, it becomes a factor of the highest importance in musical controversy. A prominent part in the music and literature of Germany in the 19th century played the popular, but controversial as well, German composer, conductor, theatre director and essayist Richard Wagner. His full name actually is Wilhelm Richard Wagner. Born in Leipzig, Germany on May 22, 1813, unlike most other great opera composers, Wagner wrote both the scenario and libretto for his works. He is primarily known for his operas, called later "music dramas". He is one of the composers who revolutionized opera by writing stage works of unprecedented length and complexity , in which the orchestra was no longer a simple accompaniment to the singers, but an integral part of the action. Wagner made the music continuous, unlike the previous tendency to make an opera as a collection of separate arias and ensembles which could be performed separately . ...read more.

The biggest issue is generated by Wagner's comments on Jews, which continue to influence the way that his works are regarded, and by the essays he wrote on the nature of race from 1850 onwards, and their putative influence on the anti-Semitism of Adolf Hitler. In some of his essays, Wagner attacks Jewish contemporaries, especially Felix Mendelssohn, and accused Jews of being a harmful and alien element in German culture. Wagner stated the German people were repelled by their alien appearance and behavior. He argued that because Jews had no connection to the German spirit, Jewish musicians were only capable of producing shallow and artificial music. They therefore composed music to achieve popularity and, thereby, financial success, as opposed to creating genuine works of art. That's why, Wagner was the Hitler's favorite composer and he made his name a symbol of the Nazis. As a result of his infatuation, Hitler adopted many parts of Wagner's thought and used this as propaganda that would influence World War II. ...read more.

It is exceedingly difficult for us of the present generation to do justice to Wagner, or to arrive at any final and impartial conclusions concerning the permanent value of his gigantic achievement. As a conclusion, today Wagner is no longer a symbol of Nationalism and Nazism, as he was at the beginning of the controversy. Like Lili Eylon in her essay "Wagner Controversy" says: "The question is not whether Wagner's music is of high or low quality, nor is the argument about how deep-seated was his anti-Semitism really relevant. There is no doubt that there have been other composers who were no less anti-Semitic. While it cannot be maintained that Wagner was directly responsible for German National Socialism, there is no doubt that he was a powerful symbol in the Nazi era, and his music held a singular importance in the Nazi psyche." For those who survived the Holocaust, Wagner's music is terrible reminder of the horror those people have gone through. For them music must be separated from the politics, but unfortunately Wagner was the composer, who actually merged them together and became the composer of "music and race". ...read more.