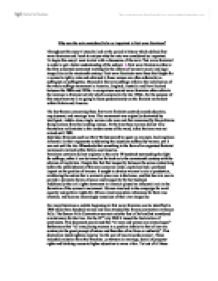 Why was the vote considered to be so important in first wave feminism?

Why was the vote considered to be so important in first wave feminism? Throughout this essay I intend to look at the period in history which defined first wave feminism and I seek to analyse why the vote was considered so important. To begin this essay I want to start with a discussion of the term 'first wave feminism' in order to get a better understanding of the subject. 1.First wave feminism refers to the first concerted movement working for the reform of women's social and legal inequalities in the nineteenth century. First wave feminists were those that fought for a woman's right to vote and achieved it, these women are often referred to as suffragists or suffragettes. Meanwhile the term suffrage refers to the mobilisation of the whole suffrage movement in America, England, Australia and New Zealand between the 1880s and 1920s. in comparison second wave feminism often refers to the increase in feminist activity which occurred in the late 1960s .For the purpose of this essay however I am going to focus predominantly on the feminist movement within Britain and America. The key themes concerning these first wave feminists centred around education, employment, and marriage laws. This movement was originally dominated by intelligent, middle-class, single women who were not that concerned by the problems facing women from the working classes. At the time these women did not view themselves as feminists in the modern sense of the word, infact the term was not coined until 1985. Individual feminists such as Mary Wollstonecraft to quote an example, had long been influential in their arguments condemning the injustices suffered by women, yet it was not until the late 18hundreds that something in the form of an organised feminist movement evolved within Britain and America. ...read more.

In 1918 an article written by Eleanor Rathbone she clearly asserts one of the key reasons as to why the vote was so important to the feminist movement; 7. "the parliamentary vote has been merely the keystone...until the keystone was firmly implanted we could not begin on the rest of the building, because its basis would not be secure". Clearly the wider goal of women's equality and freedom was not achieved through gaining the vote yet as Rathbone emphasises, it did offer a new generation of activists a solid base on which to build the future. For many the importance of the vote lies not in its actual achievement, rather it is more about the way in which it was fought for and the way it gained such widespread support and commitment. A crucial reason explaining why the suffrage movement gained such mass support can be linked to the inequality of the legal system and the ways in which it affected women. Specifically the laws surrounding married couples were severely unjust, causing much distress for the women, as it was always the wife who suffered in cases of guardianship of children, divorce and maintenance. 2Graham comments how the suffrage organisation and strategy left a legacy for the modern feminist movement, furthermore for political activists of all kinds. No one can deny the fact that the suffragists had done a great thing. They provided Britain and America with models of a new democracy that not only enfranchised women but also gave other groups the means to protest their political and social exclusion in the years to come. Furthermore the history of the suffragette movement is often the first women's history read by modern generations, and therefore the suffragettes are frequently viewed as the first role models and heroes for modern day women to look up to. ...read more.

It certainly can not be denied that much of this legislation was indeed of direct benefit to certain groups of women. The Matrimonial Causes Act of 1923 to cite an example was active in reducing inequalities in the law between the sexes in that it made it possible for women to sue for divorce on the same grounds as men. Additionally the Maternity and Child Welfare Act of 1918 was particularly productive for women as it set up welfare clinics for mothers and babies. In the spring of 1918 Millicent Fawcett continued to emphasise the importance of the vote, giving voice to the movement's elation at achieving the franchise when she spoke of the exhilaration for women having the power of the vote behind all they did. She also believed that achieving the vote signalled a momentous change in culture for women who for decades had been operating in women centred organisations. This was significant as despite having always liaised with men and been supported and assisted by men in political parties and other walks of life, yet they were now moving from the position of women exerting influence outside exclusively male operations, power by proxy as it had been, to women operating power in their own right but inside institutions which were overwhelmingly dominated by men. The vote or lack of it was important because it was symbolic of women's oppression and inequality. Finally I wish to conclude with a statement written by Robert Cooney who is the director of the Woman Suffrage Media Project. "It seems clear that their efforts and sacrifices were no idle exercise in gallantry and that without the vote, no social or legal reform was either possible or lasting." Moreover "the opposition to woman suffrage itself bears witness, in a perverse kind of way, to its significance; nothing unimportant would have been so bitterly resisted"! ...read more.