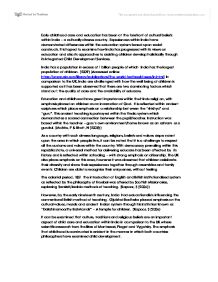 A comparision of educare systems in India and the UK

Early childhood care and education has been at the forefront of cultural beliefs within India - a culturally diverse country. Experiences within India have demonstrated differences within the education system based upon social constructs. It is hoped to examine how India has progressed with its views on education and also its approaches to assisting children develop holistically through its Integrated Child Development Services. India has a population in excess of 1 billion people of which India has the largest population of children. (2009) [Accessed online: https://www.cia.gov/library/publications/the-world-factbook/geos/in.html] In comparison to the UK, India are challenged with how the well being of children is supported as it has been observed that there are two dominating factors which stand out: the quality of care and the availability of educare. Education and childhood have great importance within the Hindu religion, with emphasis placed on children as an incarnation of God. It is reflected within ancient scriptures which place emphasis on a relationship between the "shishya" and "guru". This ancient teaching is portrayed within the Vedic system which demonstrates a sacred connection between the pupil/teacher. Instruction was based within the teacher - guru's own environment/home known as an ashram or a gurukul. (Mohite, P & Bhatt, N (2008)) As a country with such diverse language, religions, beliefs and values dependent upon the area in which people live, it can be noted that it is a challenge to respect all the customs and values within the country. ...read more.

With India having a population in excess of a billion people (Census 2001) and further more even though the country is 24 times the size of the UK, this densely populated country has the world's largest population of children 176 million children between the ages of 0-6 of which 8.1 million children are not in any form of education. ECCE has been offered through parallel systems delivered through the state, voluntary and private provisions, however, it can be noted the manner in which service provisions are delivered are greatly varied. This is apparent within both countries as India demonstrates a bigger gap in those whom are wealthy and that 26% of the population (2005) lived in poverty. (www.unicef.org) The UK also has a greater inequality in poverty with 22% of UK population in 2005 living in poverty. (http://www.poverty.org.uk/summary/key%20facts.shtml) However, it is important to understand these statistics have no bearing in terms of percentages as the measure for poverty in both countries is different. Furthermore it can be observed that overcrowding within private education and with the urgency of parents to give their children a head start to the gain access to the best schools in the area can only be advanced through the funding for such services. It was apparent at the amount invested by those families in business, industry or professional employment to get the best in education and care for children. ...read more.

There is a strong emphasis on citizenship and patriarchy within teaching element of education along with strong emphasis on morals/ family values. Centres of Excellence and Sure Start projects within the UK offer support to families with children under the age 5 years. Vulnerable people such as those living below or at the poverty line within the UK, single mothers, young parents or those who are disabled/suffering from health issues are provided with support by professionals in relation to achieving the outcomes as set within Every Child Matters (2004), giving the child best start in life. The project does involve multi disciplinary working whilst within India they are aiming to work to this, as the schemes which operate within India vary from state to state, dependant on the political views and funding. The underpinning values, cultural beliefs and historic notions of education and child care have been examined with regards to social issues affecting both countries. It can be noted that both countries are hoping to invest in the future generations, however it will be time which provides the evidence of whether these interventionist methods of Sure Start and ICDS have stood the test of time. Society constructs childhood, however the journey for children is still poised with challenges but with a hope that "Every Child has the Potential to Shine no matter what background, economic situation and within the world as children are one big community. ...read more.