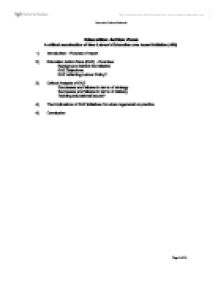 The forums were not representative of the local community. Indeed, meeting were generally dominated by officers like many local council education committees tend to be. There was little time for open discussion or the introduction of new issues.' (Power et al, 2003) Barnsley Education Action Forum, set up a service level agreement with the local authority, thereby making better use of its resources. Blackburn with Darwen Education Action Forum's scheme for purchasing and making payments within the Forum's budget was particularly successful. North Somerset Education Action Forum endured that all Forum members were aware of their roles and responsibilities by involving a consultant to come in and establish a guideline for members. DfES reseach supports the success stories: '[EAZs] have encouraged innovation, providing the impetus and ideas to overcome local barriers to achievement in creative ways. EAZs now need to prioritise and focus their zone programmes, thinking critically about which have directly impacted on the quality of teaching and learning, and hence will lead to sustained school improvement.' (DfES, 2001). A more balanced picture is presented by OFSTED: 'Most of the EAZs in the first round of inspections had a limited initial effect on school improvement. This was die to over-ambitious programmes of activities that did not always focus specifically or radically enough on the challenges faced by schools in their area. The management of zones has subsequently improved,' (OFSTED, 2003). What is clear is that 'the evidence reviewed indicates that any one policy or initiative tends to be contributory, rather than the sole provider, to developing local educational strategies aimed at meeting local need.' (Sims & Stoney, 2002). Success stories therefore, were those EAZs that were transparent, inclusive, and localised in terms of strategy. Successes and failures in terms of delivery Support for successful delivery of EAZ projects, comes largely from the EAZ Annual Report (2001), where EAZs ''...represent a concerted effort to make a sustainable change that will endure beyond a zone's statutory existence, not only in terms of examination results but also in effecting structural and cultural change in and towards education in some of the country's most disadvantaged area.'' ...read more.

4) Conclusion When the Prime Minister came to office, the importance of education was recognised: ''The best way for Governments to provide job security is through education'' (Blair, 1998). The way in which educational issues were to be tackled, with the introduction of EAZs had also been made clear: ''There will also be up to 50 small Education Action Zones by September 2000...We have the strategy and funding in place. Significant progress has been made in turning this into specific and worthwhile policies. The challenge now is to deliver on the ground. '' (Blair, 1998). And to a certain degree this challenge was met. Zones worked best where an agreed joint policy between schools and the EAZ had been established, where expertise was on hand, where the local community was involved, and where there was specific targeting of vulnerable groups. Zones were not always managed properly though, some zones had far too many initiatives (Health Action Zones, replicating the work of Education Action Zones etc), they were not monitored or evaluated properly, zones lacked profile, and there clearly was no leadership. Only the tip of the issues facing the educational system were addressed in this essay, with these becoming more complex and individualistic as the impact of the initiative is compared locally. Two final points are worth mentioning. Firstly the rate of change and/or improvement in regeneration depends on time. Though the EAZs had limited success, this may be because they have not been established long enough for there impact to be fully appreciated. Just as any 'damage done' will also take time to become evident. And finally the story should not be simply about assessing an initiative measuring its outputs and collecting the statistics. It is always useful to remember that though talking of 'national change' and 'national targets', measuring real difference will really depend if local people, neighbours, friends, etc., actually 'feel' that there are better educational opportunities out there for them...they actually feel educated. ...read more.