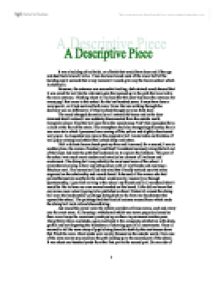 It was a building of red brick, or of brick that would have been red if the age and dust had allowed it to be. Vines had swallowed most of the lower half of the building and it seemed that at any moment it would give way the barren school which lay behind it. However, the entrance was somewhat inviting, dark stained wood showed that it was cared for not like the old rustic gate that opened up to the path that was laid to the main entrance. Thinking about it I realized that this door had been the entrance for every pupil that came to this school for the last hundred years. It must have been a very special, as it had survived both wars. Never the less walking through the doorway was no different to if I had walked through my own front door. The mood changed dramatically as I entered the house and as the door slammed shut I noticed I was suddenly disconnected from the outside world. ...read more.

It showed all the names who had proved themselves worthy to the school academically, musically or through sportsmanship. Upon first arriving at the school my friends and I all wondered what it would be like to have our own names branded on this board. Little did we know that our names were actually going to be published on there! Posted all around the dining hall were the headmasters' paintings dating back to the first ever headmaster that opened the school. The paintings had that kind of eeriness around them which made the dining hall look old and discomforting. Just round the corner were the infinite corridors of class rooms, each and every one the exact same. All housing a whiteboard which was never properly cleaned so there was always the occasional prank put up on there in permanent marker pens. About thirty chairs and desks, again mutilated to the occupants satisfaction with dents, graffiti and not forgetting the abundance of chewing gum of all assortments. ...read more.

The school was proud of its sports facilities and how fortunate the school was to have these two features. I had always admired science and the science block was where I got my first ever real lesson in the profession. Many explosions had occurred around this building and it also reminded me of some funny moments including how a pupil mistook some sulphur, which happened to be bright yellow in colour, for some sherbet. I don't think he went near the stuff again! The benches were still no different; chewing gum engulfed the undersides of stools and tables. Burn marks and craters were left scarred all over the tables proving the existence of energetic pupils hard at work The ringing of the chapel bell implored me to leave as the school was about to be closed for the day. As I was leaving the school I couldn't forget how many times I had done it before when I was one of the pupils myself. A huge wave of nostalgia rushed over me as I turned and left with that happy and satisfied feeling that I always had when I journeyed home from school as a boy. 1 ...read more.