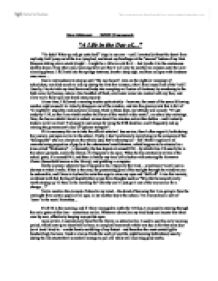 Marc Kirkwood 20/9/02 | Coursework "A Life in the Day of..." "Yo dude! Wake up and get outta bed!" rings in my ears - until I eventually thrust the duvet from my body, half-jump out of the low lying bed, and shoot my forefinger at the "snooze" button of my Bart Simpson talking alarm clock (alright - I might be a little too old for it - but I prefer it to the continuous deathly drone of my other one), knowing fully well that it will only be another ten minutes until the next alarming phrase. I fall back into the springy mattress, breath a deep sigh, and then collapse with tiredness once more... Due to my tendency to stay up until "the wee hours", even on the night (or morning) of schooldays, my mind seems to lock up during the first few minutes, after I force myself out of the "crib". Usually, I try to trick my tired brain and body into accepting an illusion of alertness, by wandering to the bath room, half asleep; where a few handfuls of fresh, cold water come into contact with my face, and allow me to fully open my dazed eyes properly. ...read more.

Whatever adrenaline my tired body can muster has taken over by now, effectively keeping my eyelids open. Upon arrival, I automatically head for the library, as stated earlier. I used to use this early morning period, which lasts up to about half an hour, to complete homework which was due in for that same day (or at least I tried to - amidst frantic scribbling of my fastest - and therefore the most unintelligible handwriting); but now I tend to always finish the work at least the night/morning beforehand, usually during the late stunts that I somehow manage to pull off, whilst still receiving good marks. This is largely due to library's now unpredictable nature, and the uncanny coincidences which seem to be relentless acts of fate; such as, for example, those mornings when I have anxiously rushed to the school from the bus stop, which is about a five minute walk away at normal pace, only to find the dreaded handwritten notice attached to either the outer or the inner door, reading: "CLOSED - STAFF PHOTOCOPYING ONLY," in seemingly the most rushed print... ...read more.

in the school canteens for over a year now, since an "unappetising" experience in year eight), but it is more or less suffice for my typical day at school. At home, I spend a lot of time on my computer, usually on the Internet. I am not a person who "plays out" a lot, although I do have the occasional bout of fresh air. The few hours of the evening after school seem to flash by in a blur, and before I have the chance to realise it, it's midnight, and I'm usually still hunched up in my swivel chair, finishing homework on my computer desk table... I hope to be employed in the scientific or technology profession - or, even more ambitiously, I dream of founding my own company. Eventually, I dream of emigrating to the USA, as I feel that this country is not going to satisfy my career hopes - as much as I "hate" to admit it. If my dreams do come true, by a wild act of fate, then I will be providing my family with the generosity they deserve, after putting up with me, and living as a working class family for all those years! ...read more.