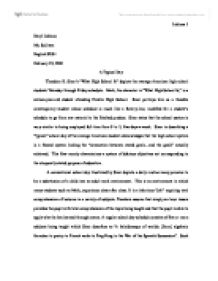 Daryl Labiana Ms. Sullivan English 93/94 February 23, 2006 A Typical Day Theodore R. Sizer's "What High School Is" depicts the average American high school students' Monday through Friday schedule. Mark, the character in "What High School Is," is a sixteen-year-old student attending Fraklin High School. Sizer portrays him as a likeable contemporary student whose schedule is much like a factory-line, modified for a student's schedule to go from raw material to the finished product. Sizer states that the school system is very similar to being employed full-time from 9 to 5, five-days-a-week. Sizer in describing a "typical" school day of the average American student acknowledges that the high school system is a flawed system lacking the "connection between stated goals...and the goals" actually achieved. This flaw merely characterizes a system of dubious objectives not corresponding to the eloquently stated purpose of education. A conventional school day illustrated by Sizer depicts a daily routine many perceive to be a substitution of a child into an adult work environment. ...read more.

Teachers need to outline the intellectual competencies that the students need, so that they don't stress-out. Teachers should focus on student mastery of the learned subject rather than merely cover content. The American high school system is fundamentally flawed; Sizer describes that the inherent practice differs from what is written in many rhetorical documents. Sizer asserts for example, that the substantial difference between the following statements, "'about 'self-realization and mental and physical growth' or 'moral and ethical values'" strikes a big difference, where "most physical education programs have neither the time nor the focus...to ensure fitness". Sizer goes on to state that "neither ethical value" is clearly defined as to what is morally and ethically right. The implication that a "gap" between stated goals and the common practices occurring in many American high school institutions depict a system which needs to redefine its goals reflecting what is actually being practiced in the daily life of its pupils. ...read more.

Sizer concludes that students and parents "take subjects" because "they are happy... [and that] rituals, most importantly, graduation plays a key to why there is such a gap between stated goals and what is actually occurring in the classroom." The concept of high school is a flawed system because many of its stated goals do not pertain to what students are achieving today in the classroom or outside the classroom. Sizer portrays Mark, as an average American high school student illustrating a "typical" day for many high school students. Sizer assumes that students are just given "facts" in every subject that they take and that students do not usually grasp the idea of what has been taught because many teachers put little effort to finish the content as opposed to helping students master the idea. Students should be able to grasp the ideas if the numbers of essential skills are more limited thereby providing more time for intellectual thought processes. ?? ?? ?? ?? Labiana 1 ...read more.