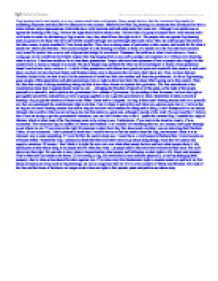 Flag burning can be and usually is a very controversial issue with people. Many people believe that the American flag stands for something important and shouldn't be destroyed in that manner. Others believe that flag burning is a statement that one should be able to make without major repercussions. Both sides have valid opinions and both sides state their case well. Although I am neither nor or against the burning of the flag, I believe the right should not be taken away. I believe that if a group of people have valid reasons and a valid point to make by obliterating a flag in such a way, they should have the right to do it. The people who are against flag burning seem to generally be those who have served this country through war and through other such ways. They are older people who believe that this country is quite wonderful if not almost perfect. They have a strong sense of patriotism to this country and would die for what it stands for: liberty and freedom. ...read more.

As far as flag burning goes, people of this generation and other generations, have a right to show how they feel about what's going on in this country. They feel that this county is doing something wrong and that is how they choose to express their grievance. The first amendment to the Constitution states that Congress should make no law. . .abridging the freedom of speech or of the press, or the right of the people peaceably to assemble, and to petition the government for a redress of grievances. So according to that document, we have the right to get together peacefully and petition or rally or group together to try to get the government to listen. Sometimes it takes as much as burning a flag to get the attention of those in the White House and in Congress. As long as they aren't hurting anyone and it is a peaceful act, they are guaranteed the constitutional right to do that. Here is where it gets tricky and where my opinion come into it. ...read more.

I personally think that there are better ways to go about doing things, ways that will attract less negative attention. Of course, I don't think it is right for us to rule over what other people believe and how other people show it. My stand point on this whole thing is let people believe what they want. Let people show what they believe however they want. We can't take away that right. We can take it away when it begins hurting other people and infringing on their right to life, liberty and property. That's where the line needs to be drawn. If, by burning a flag, you intentionally hurt someone physically, or end up damaging their property, that is when action should be taken against you. If we take away this fundamental right to express ourselves and how we feel about our nation (in ways such as flag burning), we can no longer say that we live in a true country of liberty and freedom. The land of the free and the home of the brave no longer exists when our right to free speech, press and petition are taken away. ...read more.