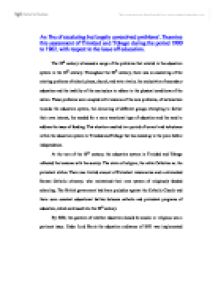 An Era of escalating but largely unresolved problems'. Examine this assessment of Trinidad and Tobago during the period 1900 to 1962, with respect to the issue off education.

An Era of escalating but largely unresolved problems'. Examine this assessment of Trinidad and Tobago during the period 1900 to 1962, with respect to the issue off education. The 20th century witnessed a surge of the problems that existed in the education system in the 19th century. Throughout the 20th century, there was an escalating of the existing problems of school places, church, and state rivalry, the exclusivity of secondary education and the inability of the curriculum to adhere to the physical conditions of the nation. These problems were coupled with tensions of the new problems, of nationalism towards the education system, the clamoring of different groups attempting to further their own interest, the needed for a more vocational type of education and the need to address the issue of funding. This situation resulted in a period of turmoil and turbulence within the education system in Trinidad and Tobago that has lasted up to the years before independence. At the turn of the 19th century, the education system in Trinidad and Tobago reflected the tensions with the society. The strain of religion, the white Catholics vs. the protestant whites. There was limited amount of Protestant missionaries and a entrenched Roman Catholic citizenry, who maintained their own system of religiously funded schooling. The British government had been prejudice against the Catholic Church and there were constant educational battles between catholic and protestant programs of education, which continued into the 20th century. By 1900, the question of whether education should be secular or religious was a pertinent issue. Under Lord Harris the education ordinance of 1851 was implemented where each ward would have a school, and it also established that each of the schools would be secular not sectarian in orientation However, this system was laden with problems. They was not enough schools to serve the needs of the population. There were language problems in the established schools, since the only language of instruction was English and the majority of the populations were patio speakers and in the case of East Indian immigrants, they spoke Hindi and Urdi. ...read more.

There was an attempt to reform the curriculum and his supporter Marryiat were proposing not classical studies for secondary schools, but an agriculture based curriculum which itself bought sharp criticism. This was viewed by the population as an attempt to making the children into estate workers and the majorities were searching for education to be an agent of social mobility. The Agricultural education incentive was introduced but it raised much opposition. At this point rather than be a mechanism of control, education became an unwitting accomplice to change. Education in Agriculture was an attempt to mould the students into, educated agriculturist would be able to ensure the growth of the sugar and cocoa industries but the implementation of agricultural education was severely flawed. According to a report by the director of education in 1922,"agriculture was tacked on to the system of education already being followed ,which was being taught from books with little or no reference to the child's environment and experience.6"This situation raised much problems as the system was introduced and the subject was taught from English textbooks with reference to Faunae's agriculture little was taught on tropical agriculture so the application of the theories study was non existence. In addition, the stigma tacked to the agricultural profession was intense therefore; it was not studied with the purposes of implementation. To add this tension, following the Moyne Commission recommendations the imperial planning authority called for a Colonial Development and Welfare Department to be set up in the Caribbean ,to administer the spending of a British grant for the social and economic development of the West Indies. The Colonial Development and Welfare ambitiously set out to rebuild West Indian society .If this agency had its way ,the system of education in Trained and Tobago would have been drastically recast. Mr. S.A. Hammond, education adviser to that Colonial Development and Welfare, recommended that little or no funds should be spent on traditional grammar school type of education7. ...read more.