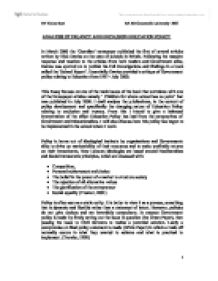 ANALYSIS Of TRUANCY AND EXCLUSION EDUCATION POLICY In March 2000 the 'Guardian' newspaper published the first of several articles written by Nick Davies on the state of schools in Britain. Following the massive response and reaction to the articles from both readers and Government alike, Davies was spurred on to publish his full investigations and findings in a book called the 'School Report'. Essentially Davies provided a critique of Government policy relating to Education from 1997- July 2000. This Essay focuses on one of the main issues of the book that correlates with one of the Newspaper articles namely ' Children for whom school has no point' that was published in July 2000. I shall analyse the publications, in the context of policy development and specifically the changing nature of Education Policy relating to exclusion and truancy. From this I intend to give a balanced interpretation of the effect Education Policy has had from the perspectives of Government and Educationalists. I will also discuss how this policy has begun to be implemented in the school where I work. Policy is borne out of ideological instincts by organisations and Governments alike to drive up marketability of their resources and to make profitable returns on their investments. New Labours ideologies are based around Neoliberalism and Social Democratic principles, which are obsessed with: * Competition, * Personal achievement and choice * The belief in the power of a market to structure society * The rejection of all alternative values * The glorification of the entrepreneur * Social equality (Treanor, 2001) Policy is often seen as a static entity. It is better to view it as a process, something that is dynamic and flexible rather than a statement of intent. However, policies do not give choices and are invariably compulsory. In essence Government policy is made by firstly setting out the issue in question (the Green Paper), then passing the issue to Civil Servants to realise a potential solution. ...read more.

Firstly, the introduction of support units and mentoring has not been tried and tested anywhere in the UK and in fact failed miserably when attempted in U.S.A. With the rapid closure of Special Schools, including Pupil Referral Units (PRU), by the LEA as a part of the social inclusion policy with it disappears the safety net that was designed to catch those pupils who inevitably will not reach the required behavioural targets that the Government's strategy requires. Ultimately we could well be trapping the most difficult of children into our school system and may start to witness the kind of violence and antiestablishment traits that have so beset schools in the U.S.A. recently. Secondly, Blunkett's refusal to abolish the school league tables introduced in the 1980's by the Conservatives, which tempted schools financially to exclude children to enhance their league standings and consequently their desirability amongst the more affluent parents. This will severely conflict with this latest strategy for receiving financial incentives for 'inclusion'. Davies criticised this myopia in that it failed to provide a proper foundation for deciding a child's future purely on grounds of education and behaviour. The problems that could arise from this 'Social Inclusion' policy are quite concerning. One wonders how protected our children and school staff will be. Teachers will be confronted with the onerous task of containing more instances of violent behaviour in class towards them and other children, thus shortening the time that conforming children can be effectively taught. The lack of any sort of punishment or disincentives in our schools only compound these problems further, allowing children to continually behave badly as they know that whatever they do will not lead to an exclusion, as the schools cannot afford to lose finances that a pupil attracts from the LEA. To combat this the schools must find innovative ways of purging uncontrollable pupils by, for example, impressing on parents the benefits of withdrawing a child from their school before permanent exclusion ensues, thus preventing any financial penalties being incurred by the school. ...read more.

The Government are expecting schools to work miracles in such a short space of time, to correct social problems that have taken years to cement themselves in society. In conclusion, I have shown how current Education policy was created and how complex a process that it can be. The reason why the Government has found it necessary to implement a policy for 'social inclusion and truancy' have been defined, it has become clear how New Labours Educational policies have more in common with conservatism than those of the left. A poem written by my daughter aptly shows how Education is seen from a child's perspective. (appendix, ii) Nick Davies highlighted many problems with the policy of 'social inclusion' but clearly these are not happening in every school. However there is a cycle of disengagement and truancy that often leads to either exclusion from school and/or later exclusion from society. New Labour is trying to work proactively to try and change the inevitability that disengagement in society brings to those who have little to look forward to. The Government have promised more on site attendance officers, awards for school and tougher fines on parents, all in the name of inclusion. If, as the Government says, on a school day, 50,000 pupils in England are absent without permission, surely the important question is why don't they want to be there? While it might seem inclusive for the Government to have a target of 95% to get GCSE at grade G or above, (Judd, 2001) it must be soul destroying to have to attend school everyday knowing that that is all you can hope to achieve. Poor GCSE results define you as under performing, whereas playing truant or being habitually excluded at least avoids this definition. If the Government is serious about inclusion it seems clear that they must focus more on what it is seeking to include young people into, it needs to be firm, not only on truancy itself but also more importantly on the causes of truancy. ...read more.