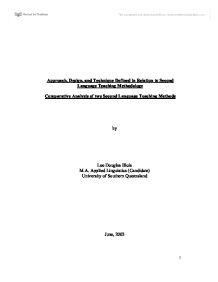 Approach, Design, and Technique Defined in Relation to Second Language Teaching Methodology Comparative Analysis of two Second Language Teaching Methods by Lee Douglas Blois M.A. Applied Linguistics (Candidate) University of Southern Queensland June, 2003 In analyzing second language teaching methodology, there are three important underlying interrelated terms that must be considered: approach, design, and technique. Long & Richards (1987, p.146) mention in their article on the subject that Anthony (1963) originally made the distinction and clarified language-teaching methodology into these three central terms. Long & Richards (1987, p.146) also point out that Anthony's (1963) distinction has been since tailored and therefore methodology is generally referred to by speaking of approach, design, and procedure. These three terms will be defined and then used to describe and critically analyze two popular second language-teaching methods: The Natural Approach and Community Language Learning. * Approach: A SLT method's 'approach' in language teaching is based both on theory of language and theory of language learning. Teachers of second languages all naturally or academically attain or accept some theory of how learners learn language and how language is constructed in terms of the various components that comprise it (affixes, words, conjuncts, verbs, sentences, etc, etc.). A method's 'approach' is therefore the basis on what the teacher believes are the means by which learners acquire language and, subsequently, how they go about teaching the L2 in the classroom via their chosen materials and teaching techniques. In further discussing approach and theory of language, it will be helpful to mention three prominent theories relating to second language teaching methodology which have bearing on approach, design, and procedure: the structural view, the functional view, and the interactional view. In a more concerted sense with respect to design, for example, these theories will have varying effects on the roles of the teachers and students within the classroom. The structural view sees language as 'a system of structurally related elements for the coding of meaning'. ...read more.

I've personally tried to outlast some of my students in 'competitions' of silence only to be out done and consequently become the most frustrated person in the room. Having someone talk is more comfortable for everyone rather than sitting in silence. In Japan, this is the opposite. There is a saying that goes, 'Silence is golden. Don't speak too much; let them guess.' So if you could imagine sitting at the dinner table in complete silence, then you could understand how hard it is for Japanese people to have a fluent conversation while sitting. (Author, About Japanese people, n.d.) However, the notion of not striving for perfection in the NA, I feel, is suitable for achieving low effective filters by not applying unneeded pressure and anxiety on the students during class-time. Allowing students to assume their own roles in the classroom by handing them the responsibility of making decisions about their participation level in class is an honorable notion, but I feel the success of this idea lies heavily in the type of students and their level of motivation for self-improvement. Many students in business-English classes in Japan are 'forced' to participate in ESL classes and if not prodded to participate in class discussions, they would be happy to sit in silence, or sleep, for the duration of every lesson. Therefore, I feel the notion of assigning the participation responsibility upon the student should be taken cautiously by teachers employing this method; especially in Japan. Teacher roles in this method are, in my opinion, easy to fulfill. Maintaining CI in class is not a daunting task should the teacher have any limited amount of experience teaching ESL. Furthermore, assessing student needs through direct inquiry does not seemingly require any type of special training. However, the difficulty in the NA may lie in maintaining the students' interest through a variety of games and activities. For example, my company classes are only two hours per week and include students with extremely low levels of motivation. ...read more.

First, there must be enough time for the learner to refer to his knowledge of the language and use the knowledge effectively during discourse. Second, the learner must be 'focused on form', paying close attention to correctness. Finally, the learner must 'know the rule'. In other words, the learner must have accurate competence concerning the rule in order for it to be correctly applied. Lastly, in describing the hypothesis, Krashen (1982, p.19) calls attention to three types of Monitor users: 1. Monitor over-users: learners who monitor too much during conversation. 2. Monitor under-users: learners who don't, or seldom, use the Monitor. 3. Optimal Monitor Users: learners who tend to use the monitor when writing and who don't use the monitor when it interferes with oral communication. The Input Hypothesis: Krashen (1981) declares another important theory called the 'Input Hypothesis' which, again, refers to the acquisition of language rather than explicit learning. Firstly, he uses the formula 'i+1' to refer to language that has already been acquired (i) plus (+) 'comprehensible input', or language, that is ready to be acquired (1). He claims: 'that humans acquire by understanding input containing structures that are a bit beyond our current competence. In terms of the Natural Order hypothesis, we move from our current level of i to the next level i + 1 by understanding input containing i +1.' (Krashen, S.; Long, M. & Richards, J. 1987: p.38). He further explains that during SLA, learners focus on the meaning of utterances rather than the forms or structures with which they are produced. Krashen compares SLA to children learning a first language (FLA). As children are growing up amongst their caregivers, they are spoken to by their caregivers in what is referred to as 'caretaker speech' (Clark & Clark, 1977: Krashen, 1982, p.22). The Affective Filter Hypothesis: Krashen (1982) suggests that three basic affective factors affect the amount of input acquired by L2 learners: motivation, self-confidence, and anxiety. He claims that the varying levels of these factors may have direct results on SLA. He further posits that these factors mainly affect subconscious acquisition rather than conscious learning. ...read more.