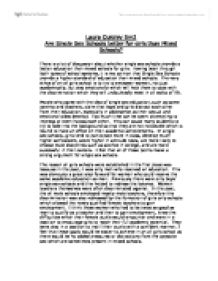 Are Single Sex Schools better for girls than Mixed Schools?

Laura Quigley 5m2 Are Single Sex Schools better for girls than Mixed Schools? There is a lot of discussion about whether single sex schools provide a better education than mixed schools for girls. Having been through both types of school systems, it is my opinion that Single Sex Schools provide a higher standard of education than mixed schools. The very ethos of an all girls school is to try to empower women, not just academically, but also emotionally which will help them to cope with the discrimination which they will undoubtedly meet in all walks of life. People who agree with the idea of single sex education, such as some parents and teachers, claim that boys and girls distract each other from their education, especially in adolesence as their sexual and emotional sides develop. Too much time can be spent attempting to impress or even harass each other. This can cause many students to try to fade into the background so that they are not noticeable which is bound to have an effect on their academic achievements. ...read more.

They were also in a position to instill their pupils with a confident manner. I feel that these goals would be easier to achieve in an all girls school as there would be no added pressures or distractions from the opposite sex which are sometimes present in mixed schools. The inclinations of children in the formative years are to gravitate towards their own sex. Girls naturally stick together and learn from each other when they are young and boys tend to do the same in the early years. It is therefore easier to teach children of one gender. The formative years of children are the best time to expose them to the company of the other gender, in order that they may learn each others' behaviour and be better prepared for adult life. This system works well in the primary school however as the children reach puberty, certain problems arise between the two sexes. In my experience in a co-educational school I found that girls do mature earlier than boys who, in the main, continue to be disruptive in class and not as focused as the girls in their studies. ...read more.

In my opinion this is an unrealistic argument as girls and boys co-exist naturally, for instance most families are mixtures of males and females who communicate day in day out in their normal family setting. There will always be a mixture of male and female teachers with whom the child will have to communicate and they will also meet persons of the opposite sex in extra curricular activities. Overall I agree with the option of parents and children having the choice of going to co-educational schools or single sex schools. Having had the experience of going to both mixed and single sex schools I am confident that I have benefited more from a single sex education system. I have found that there are less discipline problems in an all girls school and I am constantly being encouraged to reach my full academic and personal potential. I also feel that the teachers in single sex schools are able to concentrate more fully on their pupils education which is a huge benefit. ...read more.