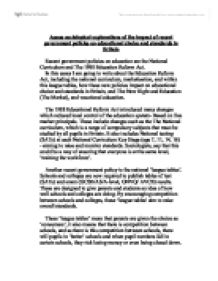 Assess sociological explanations of the impact of recent government policies on educational choice and standards in Britain Recent government policies on education are the National Curriculum and The 1988 Education Reform Act. In this essay I am going to write about the Education Reform Act, including the national curriculum, marketisation, and within this league tables, how these new policies impact on educational choice and standards in Britain, and The New Right and Education (The Market), and vocational education. The 1988 Educational Reform Act introduced many changes which reduced local control of the education system- Based on free market principals. These include changes such as the The National curriculum, which is a range of compulsory subjects that must be studied by all pupils in Britain. It also includes National testing (SATs) at each National Curriculum Key Stage (age 7, 11, 14, 16) - aiming to raise and monitor standards. Sociologists, say that this could be a way of ensuring that everyone is at the same level, 'training the workforce'. Another recent government policy is the national 'league tables'. Schools and colleges are now required to publish tables of test (SATs) ...read more.

Since 1997, it has also inspected LEAs, and since 2000, further education colleges. This aimed to ensure schools, colleges and LEAs were doing a good job, by publishing their inspection reports and requiring action to be taken on any weaknesses identified by the inspectors. In April 1993, further education was made independent of LEAs, and many polytechnics became universities. These changes aimed to create a level playing field between post-16 educational institutions, and to encourage them to operate on the same market principals as schools, with competition between them for students and therefore funds. New Right approaches have usually started from the central idea that the only way to create an efficient system is through the 'mechanism' of the market. A market works through having consumers and sellers. If a seller does not produce what a consumer wants, when they want it, in the way they want it, that consumer can go elsewhere. Competition between sellers improves quality and efficiency. As education in Britain for the past 130 years has been predominantly a public service, the absence of any market mechanism has made it inefficient and ineffective. Applied to education, a market would force schools to compete with each other for 'consumers' (pupils/parents). ...read more.

Vocational Education in schools brings more 'schools-industry' links. Functionalists see vocational education as positive as it allows for skills provision. Marxists see vocational education as the bourgeoisie training the proletariats as workers- 'keeping them down'. Symbolic interactionalists see it as providing more choice and benefiting the individual. There has been a great impact of recent government policies on education, such as league tables making parents and pupils as more as consumers, and ensuring that the 'poorer' schools lack benefits or face closing down. It is more likely that a parent will choose a school/ college that has better results than that of a school/ college with bad results. This gives them choice as a consumer. There have been many recent government policies, therefore many sociological explanations of the impact of these, such as functionalists, Marxists and symbolic interactionalists all having different views on vocational education. To conclude this essay, I am just going to state that there are many different sociological explanations on the impact on recent government policies on education, all mostly agreeing on the fact that these recent changes are all in order to insure that the 'future workforce' is trained at the same standards. ...read more.