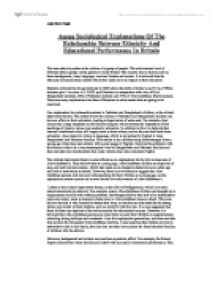 Assess Sociological Explanations Of The Relationship Between Ethnicity And Educational Performance In Britain The term ethnicity refers to the culture of a group of people. The achievement level of different ethnic groups varies greatly in Great Britain. This may be due to factors such as home background, class, language, in-school factors and racism. It is believed that the ethnicity influences these factors which then leads on to an impact in their education. " Statistics collected by the government in 2003 show that 64% of Indian's and 51% of White students gain 5 or more A-C GCSE qualifications in comparison with only 45% of Bangladeshi students, 40% of Pakistani students and 37% of Afro Caribbean Black students. There are many explanations for these differences in achievement that are going to be examined. One explanation for under-achievement in Pakistani and Bangladeshi children, is the cultural deprivation theory. This refers to how the culture of Pakistani and Bangladeshi children can have an affect on their education, leading to deprivation of some sort. ...read more.

It is also suggested that these children are deprived of the values needed for educational success. However it is believed that Afro-Caribbean parents are more likely to send their children to supplementary schooling during holidays and weekends. Also this explanation generalises, and does not take into account the two-parent Afro-Caribbean families. It also assumes that mothers are not an authoritative role in the family, but also does not take into account the female-headed families of children who do achieve. However, background and culture can also have a positive affect. For example, the Swann Report claimed that Asian families are linked with successful educational performance. This is maintained by large close-knit families, which are closely linked to the community. This results in shared resources, and an emphasis on the importance of education. This can lead to educational success. However, the term Asian refers to a number of other different ethnic groups such as Indian, Pakistani and Bangladeshi, all of which perform very differently. So, this explanation cannot be generalised to the category "Asian" as not all Asian ethnic groups perform well. ...read more.

Racism is also enforced on Asian pupils too. In particular, at primary schools, Asian pupils are often seen as "invisible" by teachers and are excluded from class discussions, as teachers believe their levels of English are not good enough for participation. However despite Asian pupils receiving negative treatment as well as Afro-Caribbean pupils, Asians still achieve on average higher than White pupils. However although explanations are offered for the level of achievement of ethnic groups, there are many criticisms with these explanations. One criticism is that the categorisation is too broad in some areas, i.e. Asian, which can mean Indian, Pakistani, Bangladeshi and Chinese, all of which perform very differently. And although these different categories are recognised by some sociologists, there are many other ethnic groups that are not. So, in conclusion although there is no clear and direct link of ethnicity to educational achievement, there are many factors which when grouped together can have an affect on educational success. Also other factors need to be considered, for example gender and class which can also have an affect. Evidence of this is Afro-Caribbean girls perform well in comparison to Afro-Caribbean boys, indicating that gender also has an influence on educational achievement. Josh Holt-Flusk ...read more.