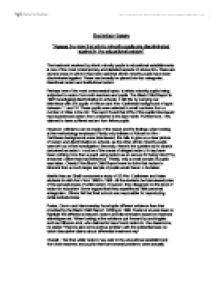 &quot;Assess the view that ethnic minority pupils are discriminated against in the educational system&quot;.

Sociology Essay "Assess the view that ethnic minority pupils are discriminated against in the educational system" The treatment received by ethnic minority pupils in educational establishments is one of the most contemporary and debated aspects of education. There are several areas in which it has been said that ethnic minority pupils have been discriminated against. These can broadly be placed into two categories, intentional racism and institutional racism. Perhaps one of the most controversial topics is ethnic minority pupils being subjected to racism from both teachers and pupils. The Black Child Report in 1997 investigated discrimination in schools. It did this by carrying out interviews with 374 pupils of African and Afro-Caribbean background of ages between 11 and 16. These pupils were selected in small numbers from a number of cities in the UK. The report found that 22% of the pupils interviewed had experienced racism from a teacher in the last month. Furthermore, 15% claimed to have suffered racism from fellow pupils. However, criticisms can be made of the report and it's findings when looking at the methodology employed. Firstly only children of African or Afro-Caribbean backgrounds were interviewed, this fails to give us a clear picture of racism and discrimination in schools, as the other ethnic minority pupils were left out of the investigation. ...read more.

He cited four main reasons for this. Firstly he found that West-Indian pupils were told that their way of speaking was second rate and unacceptable. This ties in with Bernsteins work on the effect of language and achievement on schools, with the implication that they are second rate human beings. Secondly, whilst looking at books and other resources he found that the word White was associated with good; the word Black with evil. He also found that the content of the education that pupils receive tends to ignore black students. Coard claimed that that the people whose lives were studied and acclaimed were white. Black culture, music and are were all notably absent from the national curriculum. Finally, the attitudes conveyed in the classrooms were often used y pupils outside it. He named an example where white students called West Indian students "black bastards" When looking at these two sources it is important to remember that they were written almost twenty years ago and the attitudes and education received has moved on. However, more recent work has found that institutional racism is still inherent in the system. These reports, though, are still worthwhile looking at, as they do address areas of discrimination which otherwise may be overlooked. ...read more.

Looking at all the evidence presented I feel that teachers stereotypes do affect the performance of pupils from ethnic minorities. Foster himself noted examples where teachers perceptions of the pupils behaviour, rather than ability, affected what set they were placed in, in schools. Looking at all the evidence presented, there are several areas which may cause questions to be raised. Firstly, most of the studies concentrate on Black and Asian students. These studies cannot be called conclusive as they fail to investigate discrimination in the cases of pupils from Chinese or Pakistani cultures. Secondly, the broad labelling of pupils as white provides an issue. Surely if the full extent of discrimination is to be considered, then White pupils from backgrounds such as Polish or Turkish etc. have to be considered. Considering all the issues raised I feel that several conclusions can be raised from the position of ethnic minority pupils and discrimination in the education system. Firstly, pupils are subject to discrimination in the education system. However, looking at the broad range of results gained by pupils from ethnic minorities, the extent of this discrimination must be limited or selective to particular groups. Finally, whilst there are examples of things such as institutional racism in schools, these problems are being addressed and challenged. SIMON KELLY ...read more.