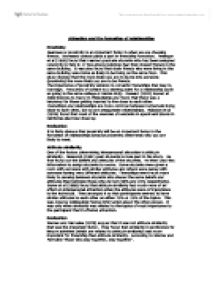 Attraction and the formation of relationships.

Attraction and the formation of relationships Proximity Nearness or proximity is an important factor in when we are choosing friends. Increased contact plays a part in friendship formation. Festinger et al (1950) found that married graduate students who had been assigned randomly to flats in 17 two-storey buildings had their closest friends in the same building. It was also found that close friends who were living in the same building were twice as likely to be living on the same floor. This study showed that the more likely you are to bump into someone (proximity) the more likely you are to be friends. The importance of proximity extends to romantic friendships that lead to marriage. Frequency of contact is a starting point for a relationship (such as going to the same college or tennis club). Bossard (1932) looked at 5000 licences to marry in Philadelphia and found that there was a tendency for those getting married to live close to each other. Friendships and relationships are more common between individuals living close to each other, but so are antagonistic relationships. ...read more.

It was only when similarity was related to the topics of most importance to the participant that it affected attraction. Evaluation Werner and Parmalee (1979) argued that it was not attitude similarity that was the important factor. They found that similarity in preference for leisure activities (which are related to attitude similarity) was more important for friendship than attitude similarity. According to Werner and Parmalee 'those who play together, stay together'. Demographic similarity Several studies have considered the effects of demographic variables (e.g. age, sex, social class). It has nearly always been found that those who have similar demographic characteristics are more likely to become friends. For example, Kandel (1978) asked students in secondary school to identify their best friend among the other students. These best friends tended to be of the same age, religion, sex, social class and ethnic background as the students who nominated them. Reasonable similarity in physical attractiveness, attitudes and demographic variables is found in friends, engaged couples and married couples. Similarity in personality Are people who have similar personalities more likely to become involved with each other? ...read more.

suggested various answers. First, if we like those who are similar to us, there is a reasonable chance that they will like us. Second, communication is easier with people who are similar. Third, similar others ma confirm the rightness of our attitudes and beliefs. Fourth, it makes sense that if we like ourselves, then we will like others who resemble us. Fifth, people who are similar to us are likely to enjoy the same activities. A great deal of research in this area is rather artificial. For example, the importance of physical attractiveness has sometimes been assessed by showing participants photographs of people they have never met, and asking them to indicate how much they would like to go out with them. Of course, physical attractiveness is going to have an enormous influence on the results when no other relevant information is available. Interpersonal relationships are formed over time as two people begin to know each other better, but the processes involved have rarely been studied in the laboratory. A further limitation of most research is that individual differences have been largely ignored. Some people attach more importance than others to similarity of physical attractiveness, attitudes and so on, but very little is known about this. ...read more.