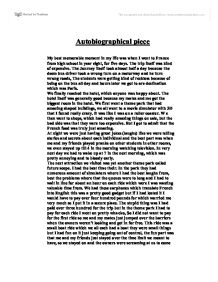 Autobiographical piece My best memorable moment in my life was when I went to France from high school in year eight, for five days. The trip itself was kind of expensive. The Journey itself took almost half a day because the deem bus driver took a wrong turn on a motorway and he turn wrong roads, The students were getting kind of reckless because of being on the bus all day and hours later we got to are destination which was Paris. We finally reached the hotel, which anyone was happy about. The hotel itself was generally good because my mates and me got the biggest room in the hotel. We first went a theme park that had amazing shaped buildings, we all went to a movie simulator with 3D that I found really crazy. It was like I was on a roller coaster. W e then went to shops, which had really amazing things on sale, but the bad side was that they were too expensive. But I got to admit that the French food was truly just amazing. ...read more.

pay for the first ride so me and my mates just jumped over the barriers when the owners weren't looking and get in for free. This ride was a small boat ride which we all each had a boat they were small things but I had fun on it just keeping going out of control, the fun part was that me and my friends just stayed over the time limit we meant to have, so we stayed on and the owners were screaming at us to come to port but we just ignore them completely and just kept on riding away from the owners, so we finally went into port after twenty minutes of riding soon as we got to port we ran out straight away cause the owners started to run after us but we out ran them. The next ride we went on was proper jokes because I pushed one of my friends into the cold water because he was in my way, it was a tricycle ride on water we just couldn't stop laughing and I started to get itches cause I was laughing so much. ...read more.

The last night was the best night because my mates and me went to students which where from are school and we knocked on the door and which I threw in fooot gas bombs in each of the rooms, we covered are faces when they did it if we didn't we would have been in a lot of trouble. When the bombs went off we saw students holding their noses and the funny part was that they couldn't go back into their rooms until the smells had gone, which was long as until about two in the morning. I even did it to the teacher's rooms and they never found out, where I was lucky. I couldn't get to sleep for the whole night because I couldn't stop laughing from the prank my friends and I did. I the morning after the prank at breakfast some students couldn't even eat properly because they still got the gas smell in their mouths, which I found pretty amazing and I just started to laugh because I just couldn't jeep it in I had to let it our. This trip, which I enjoyed very very much mainly because that there were no parents around and if they were there I couldn't do all those brilliant pranks. ...read more.