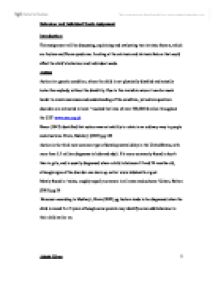 Introduction: This assignment will be discussing, explaining and evaluating two intrinsic factors, which are Autism and Down syndrome. Looking at the extrinsic and intrinsic factors that could affect the child's behaviour and individual needs. Autism Autism is a genetic condition, where the child is not physically disabled and actually looks like anybody without the disability. Due to this invisible nature it can be much harder to create awareness and understanding of the condition, yet autism spectrum disorders are estimated to have ' touched the lives of over 500,000 families throughout the U.K' www.nas.org.uk Kaner (1943) identified that autism was an inability to relate in an ordinary way to people and situations. Brain, Mukherji (2005) pg 166 Autism is the third most common type of developmental delay in the United States, with more than 1.5 million diagnoses in kids and adult. It's more commonly found in boy's than in girls, and is usually diagnosed when a child is between 15 and 36 months old, although signs of the disorder can show up earlier www.kidshealth.org.uk Mostly found in 'males, roughly equally common in all areas and cultures 'Cohen, Bolton (2001) pg 26 However according to Mukherji, Brain (2005) pg Autism tends to be diagnosed when the child is round 2 or 3 years although some parents may identify some odd behaviour in their child earlier on. Most children with autism have learning difficulties and over half have an IQ of below 5; however it appears that autism is something separate from learning difficulties. Many researchers appear to focus more on able children with autism, to separate the disorder from learning difficulties, in order to learn more about autism itself. However their is no one fixed explanation of ' Autism', mainly because the characteristics used to diagnose the child with autism are similar but, the behaviour and abilities of each child with autism will differ and so it is not easy to find one single cause. ...read more.

http://www.nichd.nih.gov/publications/pubs/downsyndrome/down.htm So due to the government stressing the importance of accepting those with special needs has promoted the society to try and accept people with special educational needs and disabilities. Regarding what their individual needs may be. So over the past few decades, beginning with Section 504 of The Rehabilitation Act of 1973, continuing with the education for All Handicapped Children Act (public law 94-142) which was passed in 1975 and resulted in special educational services in separate classrooms as the model for helping children with disabilities. The individualized Plan (IEP) became the blueprint for each child's educational program for the school year. In 1997 legislation was passed for individual with Disabilities Education Act amendments. (IDEA 97) Due to this legislation communication between schools and outside agencies developed which benefited the child as they were supported in the areas where they may have lacked. This awareness is still ongoing as the government issued the white paper valuing people: as strategy for learning disability for the 21 st century. This paper was published on 20th march 2001. It is the first white on learning disability for thirty years and sets out a positive and challenging programme of action for improving services. Hassold T, Patterson D (1999) pg 145 The governments latest strategy for special educational needs is their aim to 'bring all the relevant services together' Children Now 25 feburary-2 march (2004) Pg 19 So in conclusion there has been no real cure found for children with Autism, Aspergers or Down syndrome and many other intrinsic illnesses. However the main progression since the 19th century is that there is a lot of ways proved that can provide help in dealing with children with their condition, also support groups, organizations that parent/carers, children can access. But the inclusion of those with special needs not only in education but as respectable human beings in society as been the view and has taken great strides since the 19th century and will now hopefully only keeping progressing. People have now started to realize that those with intrinsic illnesses also have extrinsic factors affecting their condition and behavior. ...read more.