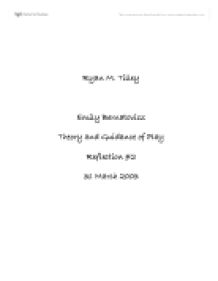 Boys and Girls: Superheroes in the Doll Corner.

Ryan M. Tilley Emily Bernatovicz Theory and Guidance of Play Reflection #2 31 March 2003 Boys and Girls: Superheroes in the Doll Corner The article seemed to be a way for the teacher to learn something about her students that she never really understood before; at the end she realized the difference between telling and acting. I believe the article was broken into three sections: boys and guns, rules of play, and Franklin. I do not believe "Girls" should be in the title of the article. The story was almost completely surrounded with boys, using girls as side notes every other paragraph. The girls were no more than a comparison to the opposite side of the boys. The doll corner does make sense with the Franklin story though. Yet, I feel the entire article makes these children look like teenagers. The writer gives credit, where I feel, could not be obtained through maturity yet. The first section of the article talked about why the door was being closed. It was closed for the boys, sometimes the girls, were being too loud. Mostly the boys were running around and shooting off pretend guns at each other, while the girls played in the doll corner. ...read more.

The first part of this article shows me that a classroom of spoiled brats will come from this room or the boys will all end up in jail. Next, the rules of play and again I feel the teacher needs more schooling. The rules are no more than common sense that even a child understands. Rule one: "a player or group of players may not disturb other players." Simply stated, that is the golden rule. I understand that would be harder for the boys; when all they do is gunplay, the object is to disturb everyone else by killing them. I get the idea here that the teacher lets the boys steal from the girls as part of their play. That seems to stop the girls' play and have no fairness value. The teacher seems to be very favorable to the boys, as seen in rule two and three. Rule two: "the girls do not share space and materials as well as the boys." Rule three: "Boys do, of course, run more-much more." The teacher makes the boys seem rowdier yet more giving and willing to share. Common sense...boys will run more. Rule four, only to boys: "no grabbing, pushing, punching, or wrestling." ...read more.

The teacher here seemed to use a sociodramtical approach to teach Franklin a lesson. The teacher also used too much of a hands-off approach when allowing the boys to use guns as play. She intervened with the children's play a little, yet did not seem to direct what they were doing, just simply try to much to involve herself in the play. The teacher should read over what Smilansky has to say about play and realize that play is related to social and cognitive development; guns should not be allowed and boys and girls should not be gender typed. I did like the way she used the story of the fox to try to teach a lesson; this was a good example of Isenberg and Jalongo's creative drama play. By letting the children act out the story, she tried to place them in roles similar to their own characteristics; story drama. Letting the boys play with guns may cause a problem according to Roskos and Neuman, who state, "Children may act as they have observed adults perform in real life." Overall the article seemed very prejudice and boy-oriented. The teacher learned a lesson, which is good, yet as teachers, the students should be the ones doing the learning. ...read more.