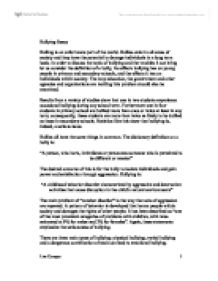 Can Bullying become a thing of the past?

Bullying Essay Bulling is an unfortunate part of the world. Bullies exist in all areas of society and they have the potential to damage individuals in a long term basis. In order to discuss the topic of bullying and the troubles it can bring let us consider the definition of a bully, the effects bullying has on young people in primary and secondary schools, and the effects it has on individuals within society. The way education, the government and other agencies and organizations are tackling this problem should also be examined. Results from a variety of studies show that one in two students experience occasional bullying during any school term. Furthermore one in four students in primary school are bullied more than once or twice at least in any term; consequently, these students are more than twice as likely to be bullied as those in secondary schools. Statistics like this show that bullying is, indeed, a serious issue. Bullies all have the same things in common. The dictionary definition on a bully is: "A person, who hurts, intimidates or persecutes someone who is perceived to be different or weaker" The desired outcome of this is for the bully to isolate individuals and gain power and satisfaction through aggression. Bullying is: "A childhood behavior disorder characterized by aggressive and destructive activities that cause disruption in the child's natural environments" The main problem of "conduct disorder" is the way that acts of aggression are repeated. ...read more.

Even at primary age the consequences can become even more drastic and can lead to injury. This can be injury caused by a bully or by self harming. Most of these consequences also affect secondary school victims especially the self harming. Ay people believe that victims harm themselves deliberately because they have the power to do so. It is seen as one area of life a vulnerable child can control and it is not uncommon for a victim of bullying to take emotional frustration out on himself or herself. One last consequence is truanting school. Truancy can lead to bad exam grades and getting into trouble as school and at home. Approximately 10% of children have missed school because of violence, showing that bulling has had a detrimental effect on education. Secondary schools also have bullying problems. It can sometimes be hard to notice symptoms of bullying in a secondary school pupil because children go through many changes both emotionally and physically at a secondary school age. One study reveals the following statistics. One in ten secondary school children are bullied more than once or twice at least in any school term. Some research states that one third of secondary students are bullied during the course of the school year. It is recognized at secondary school pupils will change their circle of friends and can become unsettled as a matter of course. ...read more.

In schools the government also sees that this plays a large part in anti-bullying campaigns and schools now have peer support councils where a victim can go and speak to someone to seek help. Bullying and its consequences have also been built into Personal and Social Education lessons in order to highlight the devastating impact on individuals bullying can have. Education is all about enlightening people and it is seen as being necessary to educate children on the danger of this aggressive act. The media are seen as being very important to every aspect of modern day life. For example, television communicates in all ways to almost all sectors of our population. It is therefore, a vital tool against bullying. The television has programs such as soap operas creating story lines to show bullying and the fear it creates. Channel 4 has shown a series raising the consequence of bullying and showing the stories of individuals who have over come bullying. Finally, high profile and successful people such as David and Victoria Beckham have also told their survival stories, showing hope and a future to victims. In conclusion, I feel that if everyone in society works together bullying can become a thing of the past. It is unacceptable and completely unnecessary. It is not the victim who needs to change to fit in or get along: it the bully who needs help. ?? ?? ?? ?? 1 Lisa Conquer ...read more.