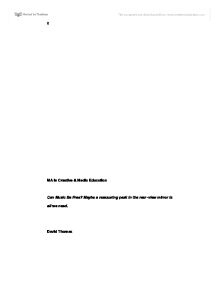 Can Music Be Free

MA in Creative & Media Education Can Music Be Free? Maybe a reassuring peak in the rear-view mirror is all we need. David Thomas The Internet has allowed digital media content to be freely copied and moved across the world's computers without concern for copyright. The use of digital delivery channels over the Internet to distribute free music can however be an effective marketing tool encouraging consumers to purchase goods and turn away from P2P file sharing. Introduction In the year of 1999 a college student in the USA came up with a concept. This was to share his digital music with other Internet users with the idea that they may share their music too. Individuals running a free utility program would allow other users (also running the program) access their local hard drives and digital audio across the Internet. The program he invented catalogued titles, bands, albums and audio quality and allowed users to search what they wanted and download the audio files directly to their own hard drives. This was the start of what has now been referred to as Web 2.0 and with his program Napster, Shawn Fanning started a revolution in the way music was distributed, opening the doors for a multitude of file sharing programs that would change the cultural view of artistic ownership of digital audio and media. Music, film, television, photography and texts had all been reduced to a collection of 1s and 0s that could easily be shared at great speed over the Internet without any regard to license and copyright. The music industry at the time, including record labels and musicians, reacted with a number of lawsuits protesting copyright infringement. Within 2 years of its' inception Napster was shut down, but by then the snowball was rolling and gathering speed with a diversity of the world's society sticking to its enticingly cool and shiny exterior (beneath which may lurk something that ultimately will not enhance the music listeners experience, something that will be discussed later). ...read more.

This is referred to as launching a product 360�, a buzz word in the industry, Theory Media analysts have over the last half-century been studying and trying to predict the impact technology would have on culture and society. Following are some useful views that help to place free music within the context of history. Jenkins' View Henry Jenkins foresees opportunities to direct media content across many channels to open up markets and increase revenue. He states: "it is the sound that is the medium and the delivery technologies become obsolete and get replaced." MP3, CDs or, in the past, cassettes are delivery technologies as is the iPod. 'The medium's content may shift (as occurred when television displaced radio as a storytelling medium, freeing radio to become the primary showcase for rock and roll), its audience may change (as occurs when comics move from a mainstream medium in the 1950s to a niche medium today), and it's social status might rise or fall, (as occurs when theatre moves from a popular form to an elite form), but once a medium establishes itself as some core human demand, it continues to function within the larger system of communication options." Here he has identified what is basically the transition period we are experiencing presently, the arrival of a new medium that delivers content in a different way, the Internet as a means of delivery music to consumers, there may be shifts in listening habits but essentially the content remains as important as before. "Once recorded sound becomes a possibility, we have continued to develop new and improved means of recording and playing back sound. Printed words did not kill spoken words. Cinema did not kill theatre. Television did not kill radio. Each old medium was forced to coexist with the emerging media." This is becoming more apparent as more artists chose to use the Internet as part of their business model; Sigur R�s have embraced these views and demonstrated how new emerging media can exist with old. ...read more.

The content remains the message the medium will come and go. The content will continue to be as important even in a society where the physical product may largely disappear. The high definition, touch-screen television set with Hi-Fi quality audio and Internet connectivity may be the next delivery method for the home. However it is in the human nature to collect things of interest and there is very little value in collecting 0s and 1s in respect of them being a collectable product. A new delivery technology may emerge that is not the Apple iPod but a deluxe product that contains video footage, audio, pictures and any thing that will make the product collectable and important to own. The multi-channel delivery cannot be ignored as a means of marketing and distributing music. Addendum BBC news reported today that six of the UK's biggest net providers, in collaboration with the BPI, have agreed on a plan of action to confront net users suspected of illegally sharing music. The measures proposed by the government will see letters of warning sent out to thousands threatening a reduced bandwidth. In conjunction with this the ISPs will be working with record labels to develop legal music services. This is a move away from recent attempts to educate consumers and making scapegoats of the odd individuals. Although this is a long way from the USA's Inducing Infringement of Copyright Act of 2004 it still seems a lazy option when the solution lies in creating innovative new business models to capitalize on new technology. Recently there have been several deals between online free music providers and record labels. Qtrax have a deal with Universal, Sony have a deal with We7 and the big 4 record labels (Universal, Sony BMG, Warners and EMI) have struck a deal with Last.fm making them the world's biggest free online juke box. This all seems a move in the right direction and ultimately the need to file share will be removed and may end up being negligible, the need to pursue those that file share will become unimportant. ...read more.