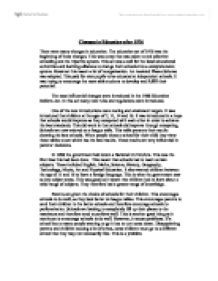 Changes in Education after 1976.

Changes in Education after 1976 There were many changes in education. The education act of 1976 was the beginning of these changes. This was a step that was taken to end selective schooling and the tripartite system. This act was a call for the local educational authorities and learning alliances to change their schools into a comprehensive system. However this meant a lot of reorganisation. An Assisted Places Scheme was adopted. This paid for state pupils to be educated at independent schools. It was trying to encourage the more able students to develop and fulfill their potential. The most influential changes were introduced in the 1988 Education Reform Act. In this act many new rules and regulations were introduced. One of the new introductions were testing and attainment targets. It was introduced that children at the ages of 7, 11, 14 and 16. It was introduced in a hope that schools would improve as they competed with each other in order to achieve the best standards. ...read more.

Disappointing parents and children causing a lot of stress, some children must go to a different school that they may not necessarily like. This is a problem. The 1988 act allowed the building of City Technology Colleges. These were college that specialized in technology. These were inner city establishments. They had private sponsors from industries. This meant that the state did not have to pay the full cost of running the buildings. They were independent and not run by the LEA's. These colleges would cater for children between 11 and 18 years old. These are good as it means the authorities have more money to spend on other schools. It meant however that the specialized schools got a lot more money as they were sponsored. Grant Maintained Schools were created, these schools were not maintained by the government and instead school children had to pay fees to attend them. ...read more.

Like schools it was trying to encourage competitions between the institutions. Higher Education expanded rapidly with the introduction of grants. However these grants kept becoming less and less and the government were trying to encourage students to get low cost loans which had to paid off once they had graduated. No such grants exist these days and many students have huge loans to pay by the time they leave university. There is talk of re-introducing grants however. A huge range of alternative higher education became available such as apprenticeship. Through these you could gain recognised qualifications. There were also training schemes allowing people to work but have one day of to go to college. Over many years education has been part of some major changes, both good and bad. These changes have made education what it is today. They now influence many children in the decisions they make after 16. They are a major part of every Childs life. Many more changes will happen, again both good and bad over the next through years that will have a major affect on the next generation and their education. ...read more.