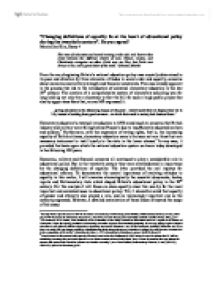 &quot;Changing definitions of equality lie at the heart of educational policy during the twentieth century&quot;. Do you agree?

"Changing definitions of equality lie at the heart of educational policy during the twentieth century". Do you agree? Maximilian Hirn, Essay 4 The want of education and moral training is the only real barrier that exists between the different classes of men. Nature, reason, and Christianity recognize no other. Pride may say Nay; but Pride was always a liar, and a great hater of the truth. - Susanna Moodie From the very beginning Britain's national education policy was crucially determined in its pace and direction by three elements: attitudes to social order and equality, concerns about economic and military strength and financial constraints. This was already apparent in the process that led to the introduction of universal elementary education in the late 19th century. The creation of a comprehensive system of elementary schooling was for long held up not only by a reluctance to foot the bill for such a large public project but also by upper-class fears that, as one MP expressed it: ...giving education to the labouring classes of the poor...would teach them to despise their lot in life, instead of making them good servants...to which their rank in society had destined them 1 Elementary education's eventual introduction in 1870 owed much to concerns that British industry and military were falling behind Prussia's due to insufficiently educated workers and soldiers.2 Furthermore, with the expansion of voting rights, that is, the increasing equality of British citizens, elementary education came to be seen not as a threat but as a necessary instrument to instil loyalty to the state in the lower classes.3 In any case, it provided the basis upon which the national education system we know today developed in the following 100 years. Economic, military and financial concerns all continued to play a considerable role in educational policy. But in the twentieth century they were overshadowed in importance by the changing definitions of equality. ...read more.

The Hadow Report was complemented by other papers, such as the Spens Report (1938) and Norwood Report (1943) which expanded on Hadow's ideas and envisaged the tripartite division of secondary education into grammar, technical and modern schools. Finally, the government published a White Paper on Educational Reconstruction (1943) in which it acknowledged that the new layout of the education system was to be 'based on a recognition of the principle that education is a continuous process conducted in successive stages'. When the Education Act of 1944 turned these suggestions into law12, it meant the end of the formal two-tier structure of state education. Free secondary education for all children between 11 and 15 was introduced. The system was to be tripartite, divided into the classic Grammar schools, secondary modern and technical schools. Pupils were to be selected for the different types based on their school records, parental wishes and the results of what became known as the 11+ examination. Despite these deep reaching changes in social attitudes and law, the private schools managed to retain their elitist character. Similarly, access to universities did not expand substantially until the 1960s and despite improvements the student body continued to have a strong social bias against children with working class background. Universal secondary education certainly was a great advance over previous policies that had excluded the majority of children from any systematic instruction between 11 and 15. However, social problems persisted and the dream of a society where class did not hinder individual development remained elusive. The secondary technical schools failed to fulfil earlier hopes placed in them and were soon abandoned by government planners. Furthermore, it emerged that the educational quality offered in Grammar schools was greatly superior to that in most secondary modern schools, the latter often being little more than a 'depository of the unsuccessful - the rag bag into which children who have not made the grade are put'.13 In this context the 11+ examinations which seemed to favour children from middle- and upper-class background became increasingly controversial. ...read more.