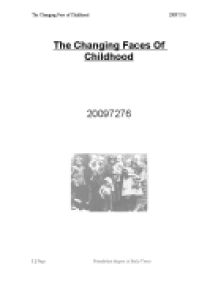 ﻿The Changing Face of Childhood 20097276 The Changing Faces Of Childhood 20097276 Module Code WMCFS 1003 Childhood, What is childhood? Childhood is a stage of life; everyone has to experience childhood to become an adult. We all have our own concept of childhood making us who we are today from our past and experiences. Kehily (2009:8) states that childhood is seen as an apprenticeship for adulthood that can be charted though stages relating to age, physical development and cognitive development. The eighteenth-century philosopher JEAN-JACQUES ROUSSEAU (1712?1778), in constructing an ideal childhood, described what he termed the "age of nature" as occurring between birth and twelve years. For the Austrian-born philosopher RUDOLFSTEINER (1861?1925), childhood was a state of physical and spiritual being roughly between the ages of seven and fourteen years, indicated initially by certain physiological changes such as the loss of the milk teeth. (www.faqs.org/childhood.09/10/2011) Others see childhood as an age, for example when you?re 18 years old you?re categorized as an adult you have the legal right to marry without your parents? permission, enter into a contract and apply for credit in your own name. The NSPCC explain that there is no single law that defines the age of a child across the UK. The UN Convention on the Rights of the Child, ratified by the UK government in 1991, states that a child ?means every human being below the age of eighteen years unless, under the law applicable to the child, majority is attained earlier.? (Article 1, Convention on the Rights of the Child, 1989) (http://www.nspcc.org.uk/Inform/research/questions/definition_of_a_child_wda59396.html#What_law_defines_the_age_of_a_child_in_the_UK.(07/11/2011) In many cultures it was not your age that made you into an adult but for boys it would be the transition of starting work and for girls when they became a wife or childbirth, irrespective of the age (Gittin, 2009). ...read more.

The march of progress view was seen as society moving forward out from the dark ages. Children were being acknowledged and this was providing a child-centered society and that childhood is at its finest it has ever been, the western society?s growths have provided this for children. ?In his 1974 History of Childhood, ?Lloyd DeMause deduced that love for children did not exist in the antiquity, where child abandonment was common among the poor until the fourth century B.CE. He also saw a landscape of CHILD ABUSE and mistreatment continuing until the very modern period?. (www.faqs.org) This is a vital argument with the march of progress view as childhood gradual has improved as infant mortality as reduced. The government organizations have provided more care and value towards children in society today. But the march of progress view is intensely argued by the ?conflict view? which observes society constructed on conflict between different social groups such as genders and social class. The conflict view criticise the march of progress view in two ways, one is that there are inequalities among children in terms of the opportunities and risk they came across. It has been said that children today are unprotected and badly cared for children are more exposed to cruelty, which makes children not protected or cared for. There have been debates on division between childhood and adulthood, that once again children are becoming faint within society. As Postman (1994) states that indeed ?childhood is disappearing at a dazzling speed?. He believes this through the similarity between children?s and adults clothing plus children committing adult crimes for example the two 10 year old boys killing a younger boy. He also argues that children and adults right are becoming very alike and children are sosponsed to adult world through television. ...read more.

This will have a vast impact on children?s childhoods; children will not be meeting their educational needs and if parents can?t afford childcare parents cannot go to work leaving poverty to conquest. The conclusion of childhood is based on culture; class and demographic research suggest that childhood is not a biologically valid phase, but a social construction. Childhood as changed immensely in the UK as time has passed with new laws being made to protect children from working. Aries believed childhood none existed within the medieval times through pictures and art he made this consumption. It is proven that children are influenced by society and laws that put in place to help it become a child-centered society. Because of the printing press parents were able to see new ways of rearing their children. Religion had a huge impact on children and physical punishment was accepted in this, but so many children were being abused the laws maintained children are to be protected from physical harm and exploitation. The ?march of progress view? seen modern society a better place for children today as child infancy has been reduced and more care for children but this has been agued by the ?Conflict view?. ?The Conflict View? believes it is constructed by society groups, class and gender and children are not better off today as children are being less cared for and unprotected. Aries thought that children watching television is introducing children to the adult world and children are growing up too quickly. Globally childhood is dissimilar as children are being put through hash circumstances through poverty children have to work in some very bad conditions. Children working have to growing up fast not receiving a childhood also children working are not getting the education they need in later life. Underpinning the effects of poverty in other counties and the affects it is have on children and families. ...read more.