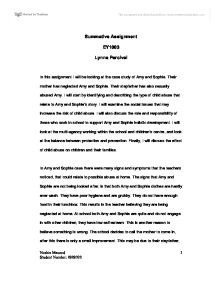 Summative Assignment EY1003 Lynne Percival In this assignment I will be looking at the case study of Amy and Sophie. Their mother has neglected Amy and Sophie. Their stepfather has also sexually abused Amy. I will start by identifying and describing the type of child abuse that relate to Amy and Sophie's story. I will examine the social issues that may increase the risk of child abuse. I will also discuss the role and responsibility of those who work in school to support Amy and Sophie holistic development. I will look at the multi-agency working within the school and children's centre, and look at the balance between protection and prevention. Finally, I will discuss the effect of child abuse on children and their families. In Amy and Sophie case there were many signs and symptoms that the teachers noticed, that could relate to possible abuse at home. The signs that Amy and Sophie are not being looked after, is that both Amy and Sophie clothes are hardly ever wash. They have poor hygiene and are grubby. They do not have enough food in their lunchbox. This results in the teacher believing they are being neglected at home. At school both Amy and Sophie are quite and do not engage in with other children, they have low self-esteem. This is another reason to believe something is wrong. The school decides to call the mother to come in, after this there is only a small improvement. ...read more.

This interaction lessens the child chances of making peer relationship later on because of no trust of others. This pattern may then be repeated with their own child, thus providing explanation of how abuse is transmitted from one generation to next. It could be argued Amy and Sophie mother was not cared for when she was a child, leading her being neglectful to her children now. Schools can make sure they support abused children, by having practitioners working in their schools. This is good for the child as the environment is familiar and the children know the staff their. They already have a relationship and know the routine and rules. This is a good opportunity to work with the child to ensure all is well. Practitioners can ensure that abused children feel safe. A child may need reassurance, a adult to trust, to have someone to listen to them etc. For this reason, practitioners have a main role to care for a child when needed. The practitioner can build positive relationships with the child and show respect and regard for the child (Howe, 2005). All these things can be done for Amy and Sophie to ensure they are well cared for and have their holistic development addressed. Practitioner can support families in keeping their children safe and intervening early to prevent a child abuse (Hearn, 1995). In Amy and Sophie case, we are told that the practitioners do intervene early when they become suspicious that something is wrong. ...read more.