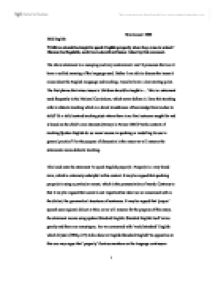 'Children should be taught to speak English properly when they come to school.' Discuss the linguistic, social and educational issues raised by this comment.

Word count: 2999 BEd English 'Children should be taught to speak English properly when they come to school.' Discuss the linguistic, social and educational issues raised by this comment. The above statement is a sweeping and very controversial one! It presumes that we all have a unified meaning of the language used. Before I am able to discuss the issues it raises about the English Language and teaching, I need to have a clear starting point. The first phrase that raises issues is 'children should be taught to...' this is a statement used frequently in the National Curriculum, which never defines it. Does this teaching refer to didactic teaching which is a direct transference of knowledge from teacher to child? Or a child centred teaching style where there is no final outcome sought for and is based on the child's own interests (Dewey in Palmer 2001)? In the context of teaching Spoken English do we mean lessons in speaking or modelling its use in general practice? For the purpose of discussion in the essay we will assume the statements means didactic teaching. This leads onto the statement 'to speak English properly'. Properly is a very broad term, which is extremely unhelpful in this context. It may be argued that speaking properly is using a particular accent, which is the pronunciation of words. Contrary to that it may be argued that accent is not important but what we are concerned with is the dialect, the grammatical structures of sentences. It may be argued that 'proper' speech uses regional dialect or that, as we will assume for the purpose of this essay, the statement means using spoken Standard English. Standard English itself varies greatly and there are many types. Are we concerned with 'world standard' English which Crystal (1990 p.275) talks about or English Standard English? In opposition to this one may argue that 'properly' floats somewhere on the language continuum between Standard English and regional dialects, such as Estuary English. ...read more.

They learn to code-switch very early on. The choice of register is very important for this skill and in communication generally. Modern society has a major influential impact on a child, world-wide media being a large part of this. English is now a world used language and although today we are looking at English Standard English there is a popular world standard English which in many people use: 'In the sixteenth century, there were under 5 million English speakers in the world - in the late twentieth century, there are 300 - 400 million first-language speakers and probably 1.5 million English speakers world wide. English is spoken in all five continents and is the recognised language of trade and international affairs.' (Thorne 1997) So children with English as a first language already have a tool for international communication. With such a wide usage it is not surprising that there are prejudices about it. People have many different perceptions of people gained through the way in which they speak. Children can pick this up very quickly. 'The continuing prejudices against non- standard accents operate more forcefully against certain accents than against others' (Honey 1989 p.37) When researching for this essay there was constant reference to 'educated' speakers using Standard English. This reference in itself implies that Standard English is seen as above regional dialects. Accents are not only regional but they can also be: social, popular culture, generational or occupational. Received Pronunciation is a social accent, which doesn't originate from any particular region and has a very high prestige and social standing (Honey 1989). It is now only used by a handful of English speakers. 'That prestige is associated with certain groups which thereby become the subject of imitation by others.' (Honey 1989 p.16) Prejudice is a common occurrence, and as teachers we hold the power and responsibility to influence children in the future. For example, in a job interview people are at an advantage if they can use the correct register and speak in an educated manner. ...read more.

In discussion of my statement, 'children should be taught didactically to speak spoken Standard English when they come to school'. I have looked at different theories but in relation to teaching my own opinion has to be valid. Personally I don't think children should be didactically taught Standard English. I believe that they do need to know how to use a the English language to their advantage and learn to manipulate it by creating a comfortable learning environment. I believe children should be able to pick up the use of spoken Standard English through adult examples and through the use of role-play and drama. I agree with many theorists who say that every child should have the tool of powerful Standard English. However I feel regional and family identities should be respected and cherished. Under no circumstances should a child be corrected when using a dialect form, such as using the double negative, but should be gently introduced to an alternative. This discussion has made me realise that previously when teaching I have been very aware of speaking 'properly'. I think that I have probably used overt prestige in order to set a good example for the children in my class, however Trudgill (1975) suggests that this could cause a social gap between the children and myself. He says that a good relationship with the child would limit this feeling of isolation often caused by power based relationships. I am all to aware of how I use language and tone of voice in the class, it is a very powerful tool and simply by using a particular tone teachers can have a huge impact on children. The bi-dialectulism approach suggested by Trudgill (1975) which acknowledges both standard and non-standard dialects and teaches children when to use both seems to be the ideal compromise. As there is no linguistic or educational reason to teach Standard English above regional dialects there are social disadvantages (Trudgill 1975). Therefore, as Crystal states: 'we do our students a disservice if they leave our care unprepared for the brave new linguistic world which awaits them' (Crystal 2000 p. ...read more.