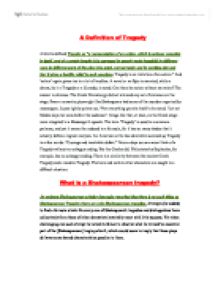 Comparative Study Between Hamlet &amp; Death of a Salesman

A Definition of Tragedy Aristotle defined Tragedy as "a representation of an action, which is serious; complete in itself, and of a certain length; it is expressed in speech made beautiful in different ways in different parts of the play; it is acted, not narrated; and by exciting pity and fear it gives a healthy relief to such emotions. Tragedy is an imitation of an action." And 'action' again gives rise to a lot of troubles. A novel or an Epic is narrated, while a drama, be it a Tragedy or a Comedy, is acted. Can there be action without narration? The answer is obvious. The Greek Dramaturgy did not allowed any act of violence on the stage. Even a romantic playwright like Shakespeare had some of the murders reported by messengers. Lucas rightly points out, "Not everything permits itself to be acted. 'Let not Medea slays her sons before the audience': things like that, at least, on the Greek stage were relegated to a Messenger's speech. The term 'Tragedy' is used in a common parlance, and yet it cannot be reduced to a formula, for it has so many shades that it actually defies a logical analysis. An American critic has admirable summed up Tragedy in a few words: "Courage and inevitable defeat." Now-a-days we can never think of a Tragedy without an unhappy ending. But the Greeks did. Philoctetes by Sophocles, for example, has no unhappy ending. There is a similarity between the ancient Greek Tragedy and a modern Tragedy. The hero and certain other characters are caught in a difficult situation. What is a Shakespearean tragedy? An eminent Shakespearean scholar famously remarked that there is no such thing as Shakespearean Tragedy: there are only Shakespearean tragedies. Attempts (he added) to find a formula which fits every one of Shakespeare's tragedies and distinguishes them collectively from those of other dramatists invariably meet with little success. ...read more.

When we are brought to feel what Willy Loman feels, the play expands its vision and moves from the specific toward the fate of man. We become Willy Loman, and his struggle becomes our struggle. In an essay titled "The Family in Modern Drama," Miller expands this concept: "We are all part of one another, all responsible to one another. The responsibility originates on the simplest level, our immediate kin. But this vital attachment is germinal and with the maturing of the person extends beyond its initial source." The family is pivotal, he suggests, but beyond the immediate family is the family of mankind. Connection with others, the need to feel others as a part of ourselves and ourselves as a part of them is an impulse native to all of us. We call people without this connectedness "sick." Yet we see this prime impulse constantly being impeded and crippled. Miller's work dramatizes and depicts the forces that induce these impediments. "All plays we call great," he continues, "let alone all those we call serious, are ultimately involved with some aspect of a single problem: how may a man make of the outside world a home? How and in what ways must he struggle, what must he strive to change and overcome if he is to find safety, love, ease of soul, identity, and honor?" Miller repeatedly searches in his writing for answers to these questions. In Situation Normal, Watson, a soldier training to be an officer is afraid his backwardness in mathematics may lead to his rejection for commission as an officer, which would seem to him like a betrayal of his company companions, to whom he has become deeply attached. This expression of a bond among "brother" combatants in the army is echoed in All My Sons, the story of a manufacturer whose defective airplane parts cause the death of his son and other aviators in wartime. ...read more.

Hamlet eventually gets hold of the sword and kills Laertes, then kills King Claudius. Just as the play ends, Hamlet takes his last breath of air, appoints Fortinbras Jr. as the new King of Denmark, and dies. In Death of a Salesman, Willy Loman, a salesman who believed himself to be a powerful man, has his life unravel before him as he loses his job, his sanity and the respect of those around him. Many years before, Willy had an affair. This "dirtied" his appearance to his son Biff, though his wife never found out. Biff later went on to become a drifter of sorts, dabbling in one low-paying profession after another until finally settling on a farm. After Willy was fired, for being too old, too inept or both,supposedly, Willy pretends he's still working and doesn't let his wife in on the bad news. Too stubborn to accept a job from his next-door neighbour, Willy is forced to lie to his family. Through visions of his older brother Ben, coupled with the degradation of his mind, Willy eventually commits suicide to ensure his son Biff's career through the Life Insurance policy. Willy dies an empty, shallow death. Hamlet and Willy are both considered tragic. The Classical Tragedy's definition was tweaked with to make it a more general encompassor. A common man's injured sense of dignity, coupled with forces beyond his control and/or ability to comprehend, displace him from his perceived place, causing the audience to recognize such and prepare itself for the inevitable finale in which the hopelessness and defeat are more poignant than the actual death. Willy and Hamlet both fell from grace, both commited morally bankrupt acts and evetually died, giving way to a re-establishment of order. Tragic men, for different reasons, bound together through their demeanor and their deaths. Some other difference between Hamlet and the death of salesman can be reffered. Such as Hamlet is a five act play but the death of salesman is a thee act play. Hamlet arouse cathersias but the death of salesman dose not. ...read more.