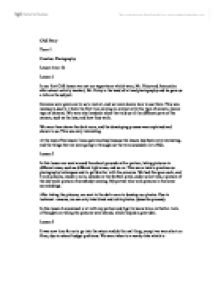 CAS Diary Term 1 Creative: Photography Lesson time: 2h Lesson 1 In our first CAS lesson we met our supervisors which were, Mr. Foley and Jeremy (an after school activity teacher). Mr. Foley is the head of art and photography and he gave us a talk on the subject. Cameras were given out to us to look at, and we were shown how to use them. This was necessary, due to it been the first time coming in contact with this type of camera. (name type of camera). We were also handed a sheet that told us all the different parts of the camera, such as the lens, and how they work. We were then shown the dark room, and the developing process was explained and shown to us. This was very interesting. At the end of the lesson I was quite excited, because the lesson had been very interesting, and the things that we were going to through out the term sounded a lot of fun. Lesson 2 In this lesson we went around the school grounds with a partner, taking pictures in different areas, such as different light areas, and so on. This was a task to practice our photography techniques and to get familiar with the cameras. We had five goes each, and I took pictures, inside a room, outside on the football pitch, under some trees, a picture of the sky and a picture of somebody running. My partner also took pictures in the same surroundings. After taking the pictures, we went to the dark room to develop our photos. Due to technical reasons, we can only take black and white photos. (describe process). In this lesson I conversed a lot with my partner and I got to know him a lot better. Lots of thoughts on taking the pictures were shared, which helped a great deal. Lesson 3 It was now time for us to go into the nature and do the real thing, except we were short on films, due to school budget problems. ...read more.

Lesson 7 This was my last lesson of the term, and they were making sure they had everything done. My job was to go around and check their books; if they had things missing they had to fill them in. There were not many people who had work missing from their books. Active: 6th Form Walk 5h Our coach was scheduled to leave school at 9:30, and our destiny was the mountains of Marbella. When we arrived we all descended off the coach, and as soon as everybody was off the coach the walk started. The first bit was forested area with large trees surrounding the walk ways. We had a portable stereo, which was a good motivation machine, because it helped our stamina and made our walk more fun. My friends and I walked at a steady pace near to the front of the group. When we got to the end of the path we sat and had a rest. While we were resting, a small group of the 6th form walked up a cliff side. After we walked to a place on the cliff, and we could see the sea, and the whole valley and the other mountains. Lots of the other students took pictures of the amazing sites. We then started making our way down the mountain. One of my friends and I ran the whole way down to the finish of the walk. When we got to the end my friend and I realized we were right next to his house. So we quickly ran to his house and had something to drink and we brought bottles of water back to the group so that they could quench their thirst. The walk was very good because it allowed me to get know the people from sixth form, and there was not one person who I thought bad of. Active: Interschool Basketball 4h Service: Christmas Bazaar 5h For the first two hours of the Bazaar I was the doorman, my job was to charge all of the people visiting the bazaar. ...read more.

I was driving because I was the lightest. As soon as the race started the long bicycle got into the lead, but there was a corner straight away and we came really fast into the back of it and there bicycle had been damaged. We restarted the race and we won. Then we had to swap machines. I was not driving so I do not know how intense it must have been to drive the long bicycle. Unfortunately we lost the race. We then had a timed race, both teams with the cart only. We won that race. I was pushing this time and it was quite tiring but it was still a lot of fun. Active: Sports Day 3h This was the schools sports day, and I volunteered to race in the 6th Form races. I entered myself for the 200m and the 100x4 relay. There are three houses, Granada, Sevilla and Cordoba, my house was Cordoba. We arrived at the Marbella stadium at around 09:30 and the events did not start until 10:00. My first race was after all of the races starting from1200m then descending in meters and rising in grades. So I had a long way to wait, and the relays were last. My race was next, so I went to my starting point, I was quite nervous and anxious for the race to start so that it would be finished. The gun went off, and I ran with all my force and I came third. The relays were last. I was running third. When the race started we did not start off to well and I got the baton third after the teachers and one other house team. As soon as I got the baton I ran and I over took both the runners ahead of me. When the races had all finished we went back to school, and the certificates were given out. There were only certificates for first places. Service: Year 2 Lesson time: 1h Lesson 1 ...read more.