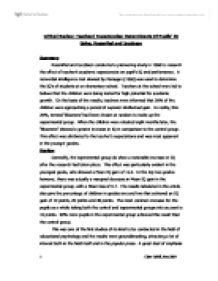 Critical Review: Teachers' Expectancies: Determinants Of Pupils' IQ Gains, Rosenthal and Jacobson Summary Rosenthal and Jacobson conducted a pioneering study in 1968 to research the effect of teacher's academic expectancies on pupil's IQ and performance. A nonverbal intelligence test devised by Flanagan (1960) was used to determine the IQ's of students at an elementary school. Teachers at the school were led to believe that the children were being tested for high potential for academic growth. On the basis of the results, teachers were informed that 20% of the children were approaching a period of superior intellectual gain. In reality, this 20%, termed 'bloomers' had been chosen at random to make up the experimental group. When the children were retested eight months later, the "bloomers" showed a greater increase in IQ in comparison to the control group. This effect was attributed to the teacher's expectations and was most apparent in the younger grades. Review Generally, the experimental group do show a noticeable increase in IQ after the research had taken place. This effect was particularly evident in the youngest grade, who showed a Mean IQ gain of 15.4. In the top two grades however, there was actually a marginal decrease in Mean IQ gain in the experimental group, with a Mean loss of 0.7. The results tabulated in the article also give the percentage of children in grades one and two that achieved an IQ gain of 10 points, 20 points and 30 points. ...read more.

A formula for his initial work was to divide experimenters into two subgroups; one group were told to expect high results from the participants and the other could only expect low results. Rosenthal investigated the reaction when participants were asked to rate photographs for the experimenters, (Rosenthal & Fode, 1961), and later recorded the ability of rats to navigate a maze depending on the expectancies of the experimenter (Rosenthal & Lawson, 1964). Rosenthal concluded that the highest results were gained from the high-expectancy group, and attributed this to interpersonal expectancy effects. Throughout the article, no attempt is made to explain why or how the expectations are projected onto others and converted into a behavioural reaction. This unresolved conclusion left the results open to interpretation and later inspired hundreds more experiments in the field. Hartley (1986) discovered that he could motivate a group of children from an underprivileged background to improve their performance on an analytical task by asking them to act like "someone who is very clever" (Hartley, 1986). Children expected to perform according to a predefined concept are likely to meet these expectations. Good and Brophy (1984) developed the results of Rosenthal and Jacobson's work and put its effects to practical use. They discovered through research that although most teachers aim to work with their students, a teacher with low expectations could fail to see a child's potential and adapt to actual changes in performance. ...read more.

On an ethical level, Rosenthal and Jacobson did account for the risk that the control group suffered academically to benefit the experimental group. The experiment could be improved in a number of ways. More control could be administered over the teaching environment, with lesson plans specified for each teacher, as some teachers work at a faster pace than others. The teacher could provide daily reports on the students, describing their attendance, concentration and progress. As a separate measure to ensure the accuracy of the results, the control and experimental groups could be taught independently of one another. The levels of expectancy could also be adjusted to include low and moderate expectancy. Although the experiment has been replicated hundreds of times using a range of methods, the results were not always reproduced. Rosenthal has since conducted meta analytic studies to reduce ambiguity in the hypothesis, finding support for his work overall. Conclusion Rosenthal and Jacobson's design could be described as overly simplistic. The results appear inaccurate, as they have not been supported by any explanations and no effort has been made to apply the findings to any practical use. Several details have been omitted in the article, including Rosenthal and Jacobson's method of selecting a school, the training and capabilities of the teachers and how the IQ scores of the students compare to the national average. However the experiment did provide support for theory of interpersonal expectancy effects, and for the association between intelligence and environment and interaction. It also inspired further research in the field and did result eventually in practical advice in the field of education. ...read more.