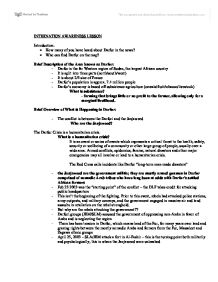 INTERNATION AWARENESS LESSON Introduction: * How many of you have heard about Darfur in the news? * Who can find Darfur on the map? Brief Description of the Area known as Darfur: - Darfur is the far Western region of Sudan, the largest African country - It is split into three parts (north/south/west) - It is about 2/3 size of France - Darfur's population is approx. 7.4 million people - Darfur's economy is based off subsistence agriculture (cereals/fruit/tobacco/livestock) What is subsistence? - farming that brings little or no profit to the farmer, allowing only for a marginal livelihood. Brief Overview of What is Happening in Darfur: - The conflict is between the Darfuri and the Janjaweed Who are the Janjaweed? The Darfur Crisis is a humanitarian crisis. What is a humanitarian crisis? It is an event or series of events which represents a critical threat to the health, safety, security or wellbeing of a community or other large group of people, usually over a wide area. ...read more.

- 200,000 have been killed (some report up to 400,000) as of 9/2006 - This includes both killings and deaths from the conditions (starvation...) Why do you think there is a discrepancy in the number of deaths? With much of Darfur inaccessible to aid workers and researchers, calculating how many deaths there have been in the past three years is impossible. - Over half of the villages in Darfur have been burned to the ground - 200,000 people are living in refugee camps in Chad What do you notice about where the refugees are going? -these refugees are camped out along the borders though so they are still very vulnerable - they are limited to the border because Chad is worried that the fighting will spill over since Chad has a very similar ethnic makeup as Darfur - Rape has been used widely as a weapon of war with women and girls prone to sexual violence when they go out of the camps to look for firewood or fuel - In June 2005 the World Food Programme of the United Nations said that 3.5 million people in Darfur need food aid (over half the population) ...read more.

- They also say the government has been blocking their access to Darfur by demanding visas and using other bureaucratic obstacles. Sudan says these have now been removed. - The government and the two rebel groups signed a ceasefire in April but this has not held. - Two further agreement were recently reached in Nigeria, brokered by the African Union, on banning military flights in Darfur and on humanitarian aid. - Some 300 African Union troops are now in Darfur on a very limited mandate. - How can you help? *Raise Awareness *Fundraise *Contact Leaders -White House -Congress -Local Officials *Join/Start a Student Action group - Do you have any suggestions of what the United States can do? (Short Debate) -appoint jobs to the students (pro/con/mediator) * What makes this situation more important than problems we have in America? (if it is more important) * Why do we only hear about the AIDS crisis in Africa and not much about Darfur? * Does the United States have a responsibility to help? * Bold questions are questions to pose to the group. ...read more.