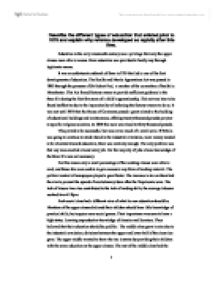 Describe the different types of education that existed prior to 1870 and explain why reforms developed so rapidly after this time.

Describe the different types of education that existed prior to 1870 and explain why reforms developed so rapidly after this time. Education in the early nineteenth century was a privilege that only the upper classes were able to access. Basic education was provided to hardly any through legitimate means. It was an unfortunate outbreak of fever in1795 that led to one of the first developments of education. The Health and Morals Apprentices Act was passed in 1802 through the pressure of Sir Robert Peel, a member of the committee of health in Manchester. This Act forced factory owners to provide sufficient guidance in the three R's during the first few years of a child's apprenticeship. This act was later to be found ineffective due to the impracticality of enforcing the factory owners to do so. It was not until 1833 that the House of Commons passed a grant related to the building of educational buildings and maintenance; offering twenty thousand pounds per year to specific religious societies. In 1839 this sum was raised to thirty thousand pounds. This proved to be successful, but was on too much of a small scale. If Britain was going to continue to stride ahead in the industrial revolution, more money needed to be allocated towards education, there was certainly enough. ...read more.

Upper and middle class girls did not look for careers. Up until the 1830s education within the home was still the norm for boys. At a time when many children went out to work at the age of five, early education was still a family matter. Schools in the workhouses additionally supplied one of the early forms of education. They aimed to give pauper children the opportunity to escape from the poverty of their parents. But the number of schools was never large. 'In 1860, for example there were only six, catering for about one in every thirteen indoor pauper children'. (Driver, 1993, p97) Dame schools were available in the early nineteenth century. Women ran these for small fees often in unhygienic lodgings. Children were supposed to be taught, but often this type of school only provided a poor quality child-minding service for working mothers. Self- help furthermore encouraged education of the working classes through self-education. It reduced the middle class fears that the working class men were estrangement. The middle classes who sponsored it therefore supported the idea of self-education. It was another way of communicating middle class beliefs. This adult education established that the working classes did want to improve the quality of their lives, they were using education a lever to better their social position within society. ...read more.

The Act was designed to discourage all originality, and produce obedience and passivity. Vast classes, drill methods and severe discipline achieved the above. These attitudes were regarded as appropriate to the working class children. They were later reinforced through the new social agencies. On the whole it was the concern from the middle classes that convinced the state of the need for the Educational Act of 1870 to be enforced. The concern towards the disciplining of the working classes, education was seen as a form of regulation, rather than to educate the individual. People were to be educated to 'know their place'. It was thought that the working class were breeding an inferior race. This was becoming of disturbance to the higher classes; the fertility rate was in decline, leading to a fall in the population size. It was now up to the working classes to provide a fit and healthy race; Britain needed this to compete in the battle of industrialisation. It was Britain's achievement in the involvement of industrialisation that could now provide the capital for the state to be able to take over the educational system. In conclusion education prior to the Education Act of 1870, was mainly aimed towards the middle to upper classes that could afford to pay. Only the basic minimum was provided for the working classes and that was mainly through the church. ...read more.