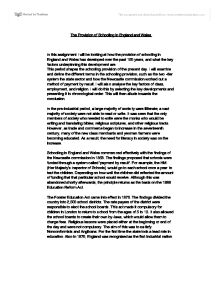 Describe the provision of schooling in england and wales

The Provision of Schooling in England and Wales In this assignment I will be looking at how the provision of schooling in England and Wales has developed over the past 150 years, and what the key factors underpinning this development are. This period shapes the schooling provision of the present day. I will examine and define the different terms in the schooling provision, such as the two-tier system the state sector and how the Newcastle commission worked out a method of payment by result. I will also analyse the key factors of class, employment, and religion. I will do this by selecting the key developments and presenting it in chronological order. This will then allude towards the conclusion. In the pre-industrial period, a large majority of society were illiterate; a vast majority of society were not able to read or write. It was seen that the only members of society who needed to write were the monks who would be writing and translating bibles, religious scriptures, and other religious tracts. However, as trade and commerce began to increase in the seventeenth century, many of the new class merchants and yeoman farmers were becoming educated. As a result, the need for literacy in society was on the increase. Schooling in England and Wales commenced effectively with the findings of the Newcastle commission in 1858. ...read more.

The 1944 Act also created two tri-partite systems; vertical and horizontal. The vertical system consisted of primary, secondary, further, and higher education. However, the structure of the horizontal system was much different. This was made up of grammar (academic) school6 secondary technical (technical) school7 and secondary modern (general) school.8 Which category a student would fall under would depend on the results of the 11 plus exam. The system was intended to allocate pupils to the schools best suited to their abilities and aptitudes. Thus, the 11 plus exam was used to determine the future on a child.9 As a result, pupils in secondary modern schools were labelled as 'failures' from an early stage. This would occasionally bring to light a self-fulfilling prophecy. 10 Althusser has argued that: "Teachers are in effect agents of capitalism who through their classroom work reproduce the exploitative relations of capitalism. They produce pupil 'types' who will accordingly receive more or less education and enter the labour force at different points".11 One of the most significant results of the 1944 Act was to educate women and the working class. It gave life to secondary school to girls and the working class, and as a result, a far higher percentage attended higher education after secondary school. This resulted in working class awareness of their disadvantaged social position The 1944 Act gave the Board of Education greater powers and a bigger budget, whilst re-naming it the Ministry of Education. ...read more.

These League Tables were made available for public viewing.19 This proved vital in a parent's decision on what school to send their child.20 The new tri-part system was brought in which included grant-maintained schools, city technology colleges21 and local education schools which were managed by the LEAs. Most recently however, in 2002 academies, faith schools and beacon schools were introduced. City Academies are publicly-funded independent secondary schools, whereas Beacon Schools are designed to raise standards through the distribution of good practice. In conclusion, it can be argued that society has made substantial developments to the provision of schooling in an attempt to move away from the typical Marxist view that the education system is unfair and serves to compel people into accepting their 'roles' in society through the 'hidden curriculum'22 and has, consequently, moved towards more of an equal approach, whereby giving everyone the chance to work at their future, and thus creating useful individuals that can contribute equally to the effective maintenance of society. With reports such as the Department for Education and Skills plan to raise the school leaving age to 18 in England by 2013, accompanied by such statements by Steve Sinnott23 stating that the move is "inevitable" and that "we cannot afford to neglect those young people who currently leave school at 16 unprepared for the rigour and demands of life in the 21st century" 24 suggests that this is the case. ...read more.