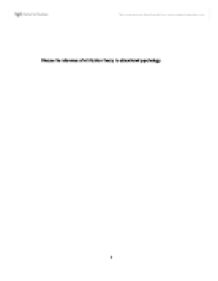 Discuss the relevance of attribution theory to educational psychology.

Discuss the relevance of attribution theory to educational psychology. Attribution theory refers to the "causal explanations that individuals infer for their own behaviour, and that of others, in an attempt to interpret their social world" (Burgner and Hewstone, 1993. p.125). As Eslea (1999) notes, "attributional styles have been found to be an important factor in a number of areas relevant to education, including childhood and adolescent depression, familial abuse, reading achievement, academic task persistence and coping with the problems of low socio-economic status" p. 35. The aim of this essay is to discuss the relevance of attribution theory to educational psychology. Specifically, the essay will focus on the success and failure attributions of children who have learning difficulties, the attributions made by children who have behaviour problems and the impact that the attributional styles adopted by teachers may have on children's learning. In exploring these issues, the essay aims to highlight the practical implications of research findings on attribution theory. According to Weiner's (1979) theory of achievement attribution, we make causal attributions for success or failure on a task according to whether the locus of the cause is internal or external (i.e., something about the person or about the situation); stable or unstable (i.e. ...read more.

found that while some children developed a state of 'learned helplessness' others were more likely to protect their self worth by ascribing failures to low effort or task difficulty and thus avoiding inferences of low ability. This performance of the 'self worth' group did not improve after training and Craske concluded that encouraging some children to try harder may place 'self worth' children under stress. It may therefore be important to distinguish between these two groups when planning interventions. Forsterling (1985) also urges caution when encouraging children to try harder, arguing that "leading a person to attribute success (especially at an easy task) to high effort might at the same time foster a conclusion of low ability" (p.504), whereas attributing failures to lack of effort could also give rise to feelings of guilt, which could also be detrimental to performance. Conversely, Mueller and Dweck (1998) reported that praise for intelligence can lead children to feel pressurised to continue to perform and they may then begin to avoid tasks that contain any risk of failure, similar to the 'self worth' group in Craske's (1988) study. They also found, however, that praise for hard work enabled children to develop more adaptive achievement behaviours after failure than praise for ability. ...read more.

"it's his job" or that's what they're paid to do".). He recommends that education officers should take time to listen and 'establish an open dialogue' with parents and Fredrickson (1988) similarly advocates an approach whereby the psychologist should engage in "explicit or accessible reasoning, sharing with parents and carers their attributions and their developing understanding of aspects of a problem situation". p. 41 In conclusion, attribution theory is extremely relevant to educational psychology. The evidence presented suggests that children with learning difficulties develop maladaptive beliefs about their abilities and attribute their failures to internal, stable causes and successes to external causes. The application of attribution theory to education can help motivate such children and improve their performance after failure by addressing their attributional styles. Furthermore, reattributional training has also been shown to be effective in reducing hyperactivity and improving the learning of children with ADHD. Similarly, children who have behaviour problems have been shown to have 'depressed' attributional styles, which may be altered if teachers reward self-enhancing attributions. Indeed, awareness of attributional styles in teachers would be highly beneficial and would prevent their attributions for children's' behaviour from negatively impacting on children's attributions. Furthermore, as Bowers (1994) highlighted, attribution theory may help to improve collaboration between the parents of children with learning difficulties and educational psychologists and teachers. ...read more.