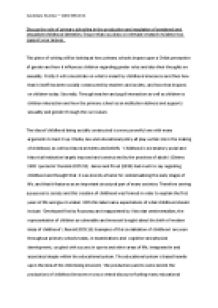 Discuss the role of primary schooling in the production and regulation of gendered and sexualised childhood identities.

﻿Candidate Number ? 1001 45416 01 Discuss the role of primary schooling in the production and regulation of gendered and sexualised childhood identities. Ensure that you draw on relevant research evidence too support your answer. This piece of writing will be looking at how primary schools impact upon a Childs perception of gender and how it influences children regarding gender roles and also their thoughts on sexuality. Firstly it will concentrate on what is meant by childhood innocence and then how that in itself has been socially constructed by teachers and society, and how that impacts on children today. Secondly, Through teacher and pupil interaction as well as children to children interaction and how the primary school as an institution delivers and supports sexuality and gender through the curriculum. The idea of childhood being socially constructed is a very powerful one with many arguments to back it up. Media, law and educational policy all play a vital role in the making of childhood, as well as historical events and beliefs. ? Childhood is a transitory social and historical institution largely imposed and constructed by the practises of adults? (Gittens 1998 ?quoted in? Renolds 2005:18) James and Prout (1998) had much to say regarding childhood and thought that it was merely a frame for contextualising the early stages of life, and that it features as an important structural part of many societies. Therefore serving a purpose to society and this creation of childhood was formed in order to explain the first years of life and give it a label. ...read more.

This can be problematic in the emotional stability of many children as the guidance unofficially promotes heterosexuality and the idea of the nuclear family whilst ignoring all other forms of sexual orientation, this can create a great confusion if children have been bought up being surrounded by a different sexual orientation, which could hinder them in social, emotional and even academic levels if they are worried or stressed, causing them to be at a disadvantage in all other areas of schooling. Also the lack of support the teachers are able to give due to the restricted nature of the guidance it ?prevents many teachers ( and government officials) from recognising and thus effectively supporting the pleasures, pains and power relations embedded in children?s own relationship cultures.?( Renold 2005:31) Over the last year we have seen teachers being ridiculed in the press for telling pupils to be less gay, due to the fact that they have not had enough information on how to cope with questions that children may ask or issues they may be having within their own sexual identity. This couples with the thinking that children are innocent and therefore do not need much support in the area of sexual orientation, providing problems for both teachers and pupils when guidance is in reality needed but support is not offered for either teacher or pupil. Carrying on with the notion of sexual orientation, teachers who are not heterosexual tend to keep their sexual affairs private and feel the need to cut off that part of ...read more.

This is a definite answer and gender separation even though he goes onto state how he thinks girls should be able to play basketball and boys play with dolls, yet alleys his fear when he states that if he played with Barbie he said ?they?d think I?m gay? ( Francis 1998:38).This again shows how the idealism of the nuclear family and in turn heterosexuality taught in primary schools has an impact on children?s gender and how he fears being thought of as gay. In conclusion childhood identities are very much constructed by outside influences of parents , peers and especially the primary school, through teachers own beliefs and safeguards as well as the actual curriculum produced by the state. Gender is almost immediately integrated into a Childs life throughout the educational system and sexual identities seem to be somewhat fabricated with the idea of males feeling the need to show hyper-masculinity in order to cement their role within the feminised world of the primary school, there being no doubt that this impacts on children?s idea of what they should be like as adults, especially if they have had no other male role models in their life. The regulation of sexual and gender identity is ongoing in primary schools through the promotion of heterosexuality and the ideal nuclear family unit as being something to aspire too when your older rather than careers etc. Therefore primary schools play a huge role in influencing or confusing children about sexual identity and gender roles. ...read more.