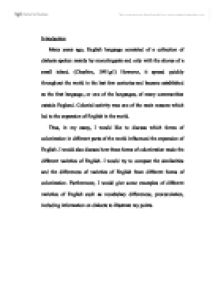 Discuss which forms of colonization in different parts of the world influenced the expansion of English.

Introduction Many years ago, English language consisted of a collection of dialects spoken mainly by monolinguals and only with the shores of a small island. (Cheshire, 1991,p1) However, it spread quickly throughout the world in the last few centuries and became established as the first language, or one of the languages, of many communities outside England. Colonial activity was one of the main reasons which led to the expansion of English in the world. Thus, in my essay, I would like to discuss which forms of colonization in different parts of the world influenced the expansion of English. I would also discuss how these forms of colonization made the different varieties of English. I would try to compare the similarities and the differences of varieties of English from different forms of colonization. Furthermore, I would give some examples of different varieties of English such as vocabulary differences, pronunciation, including information on dialects to illustrate my points. Meaning of Colonization. Colonization was a Europe-wide phenomenon partly motivated by rivalries among European states. It means the establishment of communities of English speakers, sometimes forcibly, who maintained economic and cultural links with England and who positioned themselves in a relation of power with pre-existing inhabitants.(Dick Leith, 2003, P.180) Indeed, there is no single, universal colonial experience. Each colony provided a unique context politically, social and linguistically. A common sequence of events occurred in each colony where English emerged as a main language is original settlement by English speakers, then political incorporation and a nationalist reaction that might have led to independence at the end. ...read more.

Linguistic Consequences of different types of colonization As Wendy Chance points out that one of the linguistic consequences of colonization was the appearance of new varieties of English worldwide. Some of these remain local languages of relatively low social status. Others have become codified, standardized or adopted by newly independent states as an official or main language. Therefore, I would try to discuss how different types of colonization brought the different varieties of English. For the first type of colonial activity, where Europeans largely displaced the precolonial populations, it might be supposed that in North America or Australia some dialect variation arose from contact with different indigenous languages. (Deith, 2003, P196) However, the influence of the original local languages on English was slight. It usually restricted to the adoption of words relating to the phenomena of new to the Europeans, such as local cultural practices, animals and geographical features. The settlers used English words in new senses to name aspects of their new environment. Creek, for instance, in England generally meant a saltwater inlet; gradually the colonists extended it to mean a freshwater stream. Similarly, bluff traditionally referred to a steep rise of land along the seashore, but in America it came to mean the steep bank of a river. (Dieth, 2003, P200) Besides, it was rare for phonological or grammatical features of pre-colonial languages to be adopted into English. ...read more.

It was also brought by trading and missionary during Dutch colonization for more than 3 centuries. As a result, the speaking Malay has been creolized with many other European languages influences as well as local languages surroundings. Thus, in the first kind of colonization, the varieties are mainly on vocabulary but less divergence in terms of their pronunciation and grammar as the settlers could introduce new words to describe the new environment and new features. In the second kind of colonization, English is still the official language because settlers adopt English language for political, economical and social control over the pre-colonial population. In these colonies, the varieties of English are relatively small when compared with the third kind of colonization. In the third kind of colonization, the varieties sometimes become their official language after they have developed their own distinctive phonological, lexical and idiomatic features such as in Jamaica. Conclusion In short, there is no argued that colonial activity has constributed a major reason of the rise and spread of the English language over the world. However, due to the colonization, English has emerged to different varieties in different areas of the world in the last few centuries. Varieties have been formed by the contact of English with other languages from the settlers. After the settlers have communicated with those non-English speakers, vocabulary, grammar and pronunciation will be varied when those non-English speakers may use their original language to learn English. Therefore, different colonies will have their own characteristics of these varieties. ...read more.