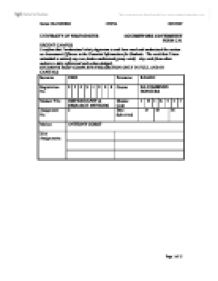 UNIVERSITY OF WESTMINSTER COURSEWORK COVERSHEET FORM CA1 REGENT CAMPUS I confirm that I understand what plagiarism is and have read and understood the section on Assessment Offences in the Essential Information for Students. The work that I have submitted is entirely my own (unless authorised group work). Any work from other authors is duly referenced and acknowledged. STUDENTS MUST COMPLETE THIS SECTION ONLY IN FULL AND IN CAPITALS Surname CHOI Forename KAMAN Registration No: 0 2 0 9 4 0 8 8 Course BA COMBINED HONOURS Module Title HISTIOGRAPHY & RESEARCH METHODS Module Code 1 H I S 5 2 4 Assignment No: 2 Date Submitted 14 04 05 Marker: ANTHONY GORST Joint Assignments: Tutor's summary comments and feedback to student(s): All marks are subject to confirmation by the relevant Subject Board Documentary Analysis Children's Overseas Reception Board Chairman's Radio Talk (was broadcasted on 1pm, Sunday 23rd June 1940) The document is the final draft of a speech to be made by Mr. Geoffrey Shakespeare, the Chairman of the Children's Overseas Reception Board (CORB) which was due to be broadcasted on radio at 1pm on Sunday 23rd June 1940. The speech outlined procedures for the application for overseas evacuees and aimed to clarify some of the questions that were on the minds of every parent wishing to send their children overseas at the time. It also made clear the risks involved and asked parents to carefully consider the options: to evacuate their children overseas or to the safer parts of Britain. From the late summer of 1939, at beginning of the Second World War, parents have been evacuating their children to the countryside to the care of either relatives or kindly strangers willing to take them in their own homes under Operation Pied Piper. ...read more.

Either way, it is likely that this number would be considerably higher had the scheme were allowed to continue for a longer period of time. The broadcast talk urged parents to carefully consider their decision of whether or not to send their children abroad. Risks involved became painfully apparent a couple of months later when the evacuation ship SS City of Benares was torpedoed by a U-boat torpedoed in the mid-Atlantic. 256 lives that were onboard were lost, including 83 out of a party of 90 child evacuees9. This brought an abrupt end to the official scheme. The talk also mentioned the possibility of the United States accepting British children. Although the citizens of the US had expressed their sympathy for the British and some even extended it to offering a temporary home, US authorities were uncooperative that it made it close to impossible. Their rigid immigration policies made it very difficult to admit unaccompanied British children in the country and no US ships were willing to transport British children on their ships as their law stated that no foreign subjects were to set foot aboard. The intention of the broadcast talk had been urge the parents that though their pain and fears are understood, careful thought and consideration must be given to their final decisions whatever they may be. It was also supposed to reassure the public and perhaps even to inject a dose of patriotism into the people of Britain: "our children will come back to us when we have secured final victory as inevitably we shall". A copy of the original draft of the broadcast talk was obtained from the National Archives and another copy was made word for word for the purpose of the appendix so it is entirely reliable. ...read more.

Parents of children at grant-aided schools will be expected to contribute the same amount as they are now paying, or would pay under the United Kingdom evacuation scheme. Parents of children at other schools will be asked to pay at a higher scale, but one which can be adjusted to their circumstance. There will be no charge for the sea voyage of children from grant-aided schools, and for other children the cost will be much lower than normal rates. When the war is over the children will be returned to this country as soon as possible with similar concessions. I understand that there is a most generous desire on the part of citizens of the United States of America to give a similar welcome to out children and that the steps are advanced for the formation of a suitable organisation for this purpose. Needless to say, we shall welcome any suitable scheme that is put forward. If you decide to take advantage of the benefits of this scheme, I know there will be much burning of the heart at the thought of parting, but parents will not allow themselves to be influenced by selfish considerations where they believe the safety of their children is concerned. You will ask me for how long will the parting be? The answer is - our children will come back to us when we have secured final victory as inevitably we shall. 1 Mann, Jessica (2005). Out of Harm's Way: The Wartime Evacuation of Children from Britain. Headline Book Publishing, London. p57. 2 Ibid, p58. 3 Ibid, p61 4 http://members.fortunecity.co.uk/naylander/evac/evac5.html, last accessed 23:43, Wednesday 13/04/2005. 5 ibid 6 ibid 7 Mann, p66. 8 Ibid, p68 9 Daily Mirror, Monday 23rd September 1940, in http://members.fortunecity.co.uk/naylander/evac/evac6.html Kaman Choi 02094088 1HIS524 10/05/2007 Page 2 of 15 ...read more.