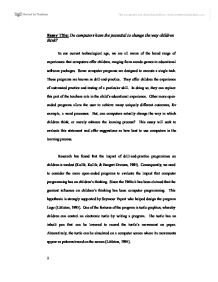 Does attachment theory provide a sound basis for advice on how to bring up children?

Essay Title: Do computers have the potential to change the way children think? In our current technological age, we are all aware of the broad range of experiences that computers offer children, ranging from arcade-games to educational software packages. Some computer programs are designed to execute a single task. These programs are known as drill-and-practice. They offer children the experience of automated practice and testing of a particular skill. In doing so, they can replace this part of the teachers role in the child's educational experience. Other more open-ended programs allow the user to achieve many uniquely different outcomes, for example, a word processor. But, can computers actually change the way in which children think, or merely enhance the learning process? This essay will seek to evaluate this statement and offer suggestions as how best to use computers in the learning process. Research has found that the impact of drill-and-practice programmes on children is modest (Kullik, Kullik, & Bangert-Drowns, 1985). Consequently, we need to consider the more open-ended programs to evaluate the impact that computer programming has on children's thinking. Since the 1960s it has been claimed that the greatest influence on children's thinking has been computer programming. ...read more.

There was much more interaction between children in the Logo sessions, ranging from sustained systematic collaboration and explicit requests for help through to almost casual 'stopping by' or 'dropping in' at the computer (Littleton, 1995, p. 88). Zemir Mevarech and colleagues (1991) chartered the progress of five classes of 12 year olds over a four-month period using arithmetic drill-and-practice software. A third of them worked alone on the computer, while the remainder worked together in pairs of similar ability in mathematics. These pairs were actively encouraged to share the keyboard, help each other and discuss and agree solutions to the problems. The results were unequivocal on both sets of tests those children who had worked in pairs made significantly greater achievement gains than those who had worked individually (Littleton, 1995, p. 89). The comparison of children working alone and in pairs at the computer has also been explored with other tasks. For example, Blaye, Light, Joiner, & Sheldon (1991) asked 11-year-old children to work on a complex route-planning task on three successive occasions. The task was presented as an adventure game in which the children were required to find a way of transporting an object from one place to another, overcoming certain restrictions and avoiding obstacles along the way. ...read more.

95). Sylvia Barbieri and Paul Light investigated some of the interactions of pairs of children working together on a computer-based problem-solving task. They observed interactions where children talked about their plans for solving the problem and whether they negotiated with each other what the next move should be. The evidence was that these interactions thought to be co-constructions of knowledge did predict how successful the children would be, both as pairs and in their individual performance (Littleton, 1995, p. 96). Social processes in computer-based learning are a great deal more significant than Papert's emphasis on the individual activity of the child. In conclusion, while Papert purports that computers have the ability to change the way that children think research would suggest otherwise. Rather, computers are powerful tools that when used correctly can aid in the learning process of the child. In order for children to experience the socio-cognitive conflict necessary to enhance the learning process it is essential to adopt the Vygotskian view whereby the role of the adult/teacher is to carefully structure the computer sessions for the child. In addition, this learning is increased further if children are shown how to effectively work co-operatively on the computer. The computer can be used as Cole and Griffin suggest as a 'medium', a socio-cognitive tool that shapes interaction in specific ways, ways that then emerge in distinctive forms of cognition (Littleton, 1995). ...read more.