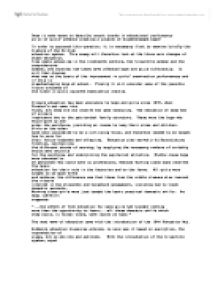 Does it make sense to describe recent trends in educational performance as on of girls' advance creating a problem of disadvantaged boys? In order to approach this question, it is necessary first to examine briefly the history of the British education system. This essay will therefore look at the three main changes of state education, free state schooling in the nineteenth century, the tripartite scheme and the comprehensive system, and consider how these have affected boys and girls differently. It will then discuss what was at the basis of the improvement in girls' examination performances and if this is disadvantaging boys at school. Finally it will consider some of the possible future outcomes of the trend in girls improved examination results. Primary education has been available to boys and girls since 1870, when Forster's act came into force, but they did not receive the same schooling. The education of boys was of primary importance due to the patriarchal family structure. These were the boys who would grow up and enter the workforce, providing an income to keep their wives and children. Girls on the other hand were considered to be a civilising force, and therefore needed to be taught how to care for their future husbands and offspring. Education also served a differentiating function, maintaining the different strata of society, by supplying the necessary numbers of suitably socialised recruits for the workforce and underpinning the capitalist structure. Middle class boys were educated to be gentlemen who could take up professions, whereas working class boys received the basic education for their role in the factories and on the farms. ...read more.

The gap continued to widen until 1994, when it was decided that less of the work, in some subjects, should be continuous assessment as this appeared to favour girls. That year the gap narrowed slightly from 9.0 per cent in 1993 to 8.7 per cent, but this was only a temporary setback. The following year the gap widened again to 9.1 per cent, in 1996 and 1997 it had risen to 9.5 per cent. At GCE 'A' level examinations, if not quite as large, a similar trend can be seen. Statistics such as these would suggest that boys are being disadvantaged at school, if it were not for the fact that they too have improved examination results. In 1990 30.8 per cent of boys gained five or more GCSE grade A-C passes, by 1997 this had risen by almost ten per cent to 40.5 per cent. This leaves the question, why has the subject of disadvantaged boys entered the discourse of education. Weiner et al. (1997) suggests that the discourse about girls' underachievement in the 1970s and 1980s was well informed and organised by feminist activists. The current arguments around boys' disadvantage have very different roots. They argue that in 1993, the James Bulger murder: "...sent shock-waves throughout Britain, and this resulted in a media-led reappraisal of how cultural changes were affecting working-class masculinity's relationship to the family, schooling, and the labour market." (Weiner et al.1997:627) During the past twenty-five years, working class masculinity has taken a great knock. Younger & Warrington (1996:301-302) suggest that there may be a link between boys' perceived inevitability of unemployment and their under performance at school. ...read more.

As this trend in the gender gap is not only visible in the United Kingdom, but can be seen in other advanced capitalist societies, it is argued here that its cause must be one of a wider social change and not just the education system. Any major attempt to modify the system in order to bring boys back to their previous position would mean that girls would have to be disadvantaged. Perhaps the answer is much more simple. If boys achievements were shown for what they are, that is an increased GCSE grade A-C pass rate of 9.7 per cent since 1990, then their self-image may improve and with it their examination results. This essay has also highlighted two of the possible results of boys being seen as not achieving as well as girls. Firstly, there is the problem of the market within the education system, and the possible consequences of selection. Secondly, the possibility of today's boys finding it more difficult to find well paid employment. If either of these happened they would lead to male disadvantage, and this is the most worrying part of the way girls' advance is creating a problem for boys and in particular those from working-class backgrounds. This is perhaps where the answer lies, not to compare gender, but to look at how boys from working-class backgrounds can be encouraged to improve their communication skills to enable them to find rewarding employment in the future. Unless of course this has been a deliberate manoeuvre, as: "The education system legitimises economic inequality by providing an open, objective and ostensibly meritocratic mechanism for assigning individuals to unequal economic positions" (Bowles & Gintis 1976:02) Perhaps in the future, men will simply no longer be economically necessary and are therefore being deliberately downgraded within society. ...read more.