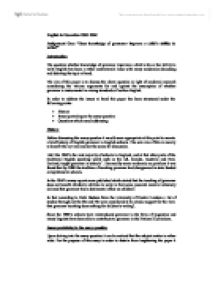 &quot;Does knowledge of grammar improve a child's ability to write?&quot;

English in Education 2003-2004 Assignment One: "Does knowledge of grammar improve a child's ability to write?" Introduction The question whether knowledge of grammar improves a child in his or her ability to write English has been a rather controversial issue with many academics discussing and debating the topic at hand. The aim of this paper is to discuss the above question in light of academic research considering the various arguments for and against the assumption of whether grammar is instrumental in raising standards of written English. In order to address the issues at hand this paper has been structured under the following points: * History * Issues pertaining to the essay question * Questions which need addressing History Before discussing the essay question it would seem appropriate at this point to narrate a brief history of English grammar in English schools. The sole aim of this is merely to benefit the lay-man and set the scene for discussion. Until the 1960's the vast majority of schools in England, and at that other parts of the traditional English speaking world such as the US, Canada, Australia and New Zealand, taught grammar in schools 1. Deemed by some academics as pointless it was found that by 1980 the tradition of teaching grammar had disappeared in state funded comprehensive schools. In the 1960's many reports were published which stated that the teaching of grammar does not benefit children's abilities to write in fact some research material adversely claimed that grammar had a detrimental affect on children2. In fact according to Dick Hudson from the University of Central London a list of studies through out the 60s and 70s were considered to be classic support for the view that grammar teaching does nothing for children's writing3. ...read more.

At the moment in the UK it can be said that there is a growing trend showing that the teaching of grammar could improve writing standards. This growing trend is most evident with the presence of grammar as being one of the main pillars of the newly introduced National Literacy (DfEE 1997) and the National Curriculum for English (DfEE and QCA 1999)5. Hudson says, "one of the reasons given for this major change of teaching policy is the beneficial effect of grammar teaching on the children's writing." Geoff Barton In the UK, Geoff Barton, a secondary school teacher with a training in linguistic, reported (1998) that some of his weakest students benefit 'dramatically' from an exploration of simple compound and complex sentence types. Mary Mason Mary Mason, a linguistically qualified teacher, designed a complete 3 year course in academic languae for 12 to 14 year olds which now has been taught over a number of years in several schools. (Mason et al 1992). The course improved writing skills dramatically. So which grammar is best? Hudson points out that studies regarding grammar have explored three types of grammar, the traditional grammar, transformational grammar and systematic grammar. Fundamentally it still remains unclear as to which form of grammar is best. Many different researches have suggested their own opinions regarding this but it still remains debateable and open to scrutiny. (ordoir and Wesdorp (1979); (Gale (1967) (Bateman and Zidonis 1966; Gale 1967; Heap 1991; Kennedy and Larson 1969; Mason and Mason 1997; Mason, Mason, and Quayle 1992; Mccleary 1995; Mellon 1969; Williams 1995.) So with regards to the research material available regarding the affects of grammar on the writing of children we can safely say that the vast majority of such material is clearly indicative that some sort of grammar in fact benefits the writings of children. ...read more.

Since these documents had the official stamp of approval, this glossary counts as the first-ever government-sponsored glossary of grammatical terminology in the UK. The Bullock Report The UK government's Bullock report in the 1960's on English teaching was a classical study and found that grammar teaching needed some drastic changing. It concluded: 'What has been shown is that the teaching of traditional analytic grammar does not appear to improve performance in writing.'6 (HMSO 1975:169) The Bullock Report was intending to encourage teachers to improve standards of English grammar teaching but with in the space of the next decade rather than improving standards England saw a dramatic end of grammar in English schools. 1 The National Literacy Strategy website is http://www.standards.dfee.gov.uk/literacy, and the site for the National Strategy for KS3 (i.e. for secondary schools - Key Stage 3 covers years 7 to 9) is http://www.standards.dfee.gov.uk/keystage3. 1 Barton, G., and Hudson, R., 2002. Grammar teaching: grind or glamour? [Online]. Available at: http://geoffbarton.co.uk/writing/recent-articles.php [Accessed 20 December 2003] 2 Harris, R. J. An experimental inquiry into the functions and value of formal grammar in the teaching of English, with special reference to the teaching of correct written English to children aged twelve to fourteen. PhD thesis, University of London, 1962. 3 Hudson, R., 200. Grammar teaching and writing skills: The research evidence. [Online]. Available at: http://www.phon.ucl.ac.uk/home/dick/writing.htm [Accessed 20 December 2003] 4 HMSO. 1975. A Language for Life. London: Her Majesty's Stationery Office. 5 QCA. "Recent research on grammar teaching." The Grammar Papers. Perspectives on the teaching of grammar in the national curriculum. 45-56. Qualifications and Curriculum Authority. 1998. Also at http://www.open.gov.uk/qca/. Publisher's reference QCA/98/052. 6 HMSO. 1975. A Language for Life. London: Her Majesty's Stationery Office. ...read more.